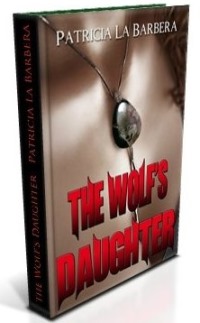 I’m delighted to welcome Patricia La Barbera here today for an interview and a look at her paranormal romance, The Wolf’s Daughter, the first book in The Tala Chronicles. Don’t forget to comment for a chance to win in Patricia’s giveaway!

Hi, Patricia, so glad to have you here today. Tell us a little about The Wolf’s Daughter:

Danger ripped through the love Tala and Matt shared in high school. Ten years later, Tala returns to her hometown. This time she’ll find a way for them to be together. But someone is just as determined she won’t.

When her mother dies, Tala returns to her New Hampshire hometown, and violent memories assault her. She struggles against supernatural powers to save her former high-school boyfriend, Matt. Tala stays alone in the family’s bleak house, next door to a cemetery. She finds amulets, macabre newspaper photos, and her grandmother’s diary, all hinting at an animalistic strain, for which a remedy may or may not exist. She must prevent her enemy, Willis Sharp, from obtaining an amulet, which would increase his power.

In her grandmother’s diary, she reads about a man accused of revolting brutality and discovers he’s the only one who can help her. But she has to risk confronting him by traveling through the wilderness of wolf territory.

I’m a huge fan of the Twilight movies. But I wanted to write a series in which wolf shape-shifters are the main characters. And the series had to have its own special twist.

My next two books in The Tala Chronicles are The Wolf’s Revenge, scheduled for release soon, and Wolf Slayer. I’m also giving lectures on writing and editing for the Sarasota Editors Association. I recently gave a talk on self-publishing and one on the requirements for a book’s first sentence, first paragraph, and first page.

Yes, on Fabulous Freebie First-Page Friday, authors can post a short synopsis of their books on my blog. They’re also welcome to post bios and photos or images of book covers. Each week I’ll choose one author for a free first-page edit (up to 300 words).

I’m in the revision process for the fourth book in The Tala Chronicles. I’d like to publish a collection of my short stories and a book of my humorous horror poems. I specialize in genre editing, and I’m writing a book addressing that subject. My basic goal, though, is writing several thousand words a day.

Other than ideas just popping into my head? Well, I scan the dictionary for interesting words. That’s how I got the idea for a story I wrote called “Angel’s Trumpet.” And I find some interesting character names. I love to eavesdrop, too. I get so many ideas from conversations.

I write the ending first. I have to know what that last sentence is. Then I think about the beginning. It’s strange, but as I’m writing, I feel as though I’m watching a movie. The characters write the middle. Sometimes I imagine they’re speaking the dialogue. I write scenes as fast as possible so I won’t self-edit in the first stage. The scenes are full of dialogue, and then when I revise, I frequently layer in details. I learned this technique from Chelsea Cain at Jessica Morrell’s Summer in Words.

My grandmother. Every time I’d visit her, we’d take the subway to wonderful places in New York City. She taught me how to read when I was three years old by helping me sound out the ads on trains. My grandmother loved words. She’d always challenge her sister and brother to spelling contests. And she loved true-crime stories, too.

“What happened with Tala?”

Matt leaned back on Jack’s stained microfiber recliner. He shook his head. “Look, I know you’re my best buddy, but I really don’t want to talk about it.”

“Do you really think it’s a good idea to bottle all that up?”

Matt let his hand drop to the side, and Rocky, Jack’s Labrador lying next to him, raised his head and licked it. He absently patted the dog. “No, but I don’t know what else to do with it.”

“I already sent her a note saying I didn’t want to see her again.” He’d omit the part about asking her to leave town as soon as possible.

“That doesn’t sound like you, giving up so easily.”

He sat up straight. “Oh yeah, Jack. Well, maybe you don’t know me as well as you think you do.”

Jack put up his hands. “Okay, simmer down.”

Matt pounded a fist on the armrest. “It’s just that when I was with her in the restaurant, I got the same feelings as that night in the graveyard after the prom. I felt this energy surge through my body, and I-I had to get away from her before…something happened.”

“You were probably just nervous. You know, you finally saw the woman again whom you’ve dreamed about all these years.”

“That would all be plausible if you were talking about a normal person.” Or persons. But in spite of everything, he wanted to blame the whole thing on himself. “No, it was more than that with me.”

“I drove home and went to sleep.” The truth, at least part of it. He had awakened in the morning and couldn’t remember how he had gotten home or what had occurred during the night.

“Well, all I know is you sure dumped Megan fast when Vanessa told you Tala was coming back to town.”

“You’re right, and at least I found out Megan’s not the one. But that doesn’t mean Tala is, not after what happened again.”

Jack shook his head. “I don’t care what you say. Seems to me this is unfinished business.”

“It’s unfinished business that’s none of your business.” Matt stormed out, realizing he was acting like a jerk, but kept walking anyway without looking back.

I’d like to raffle off a paperback copy of The Wolf’s Daughter. Who first introduced you to the love of reading? Just leave your email address with your comment and I’ll pick a winner on Wednesday, April 17. 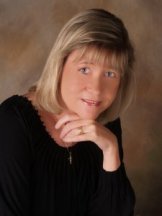 Patricia La Barbera, MFA, is an author, an editor, and a writing-contest judge. She’s also the organizer of the Sarasota Editors Association. Patricia’s an active member of the Horror Writers Association and a member of Mystery Writers of America. Various magazines and anthologies have featured her work. The next book in her series, The Tala Chronicles, is The Wolf’s Revenge. Its release is upcoming. She lives in the Sarasota, Florida, area with her husband.

You can find Patricia at:

You can find The Wolf’s Daughter at:

6 thoughts on “Interview With Patricia La Barbera, Author of The Wolf’s Daughter”