Hi, Lilly. Tell us a little about your new release, Embrace the Darkness:

Embrace the Darkness is a paranormal romantic suspense featuring a sexy vampire named Gerard. It’s available now on Amazon and will be available in print and ebook from other venders on June 21.

An experimental vaccine gives vampire Gerard Delaroache hope for the first time in two centuries–until two people are brutally murdered, and he suspects a conspiracy between vampires and mortals. To solve the crime, he must put his trust in a beautiful detective. But is former soldier and MP turned detective, Amber Buckley, a threat to his existence? Or the answer to his prayers?

Amber Buckley and her partner are assigned to do follow up interviews in the Lifeblood of America slayings. Amber believes she and Reid are just new eyes on a cold case.  That is until she meets Gerard Delaroache. Something about him teases long-buried memories Amber would rather not chase. However, the two join together, falling into more than resolution of a murder case. It seems Amber has some dark secrets of her own.

To find their way into the light, Amber and Gerard must first EMBRACE THE DARKNESS

Embrace the Darkness is the sequel to my 2010 vampire romance, Out of the Darkness. While writing OTD, one of the secondary characters, Gerard Delaroche, demanded his own story. And I just couldn’t ignore him.

My stereotactic biopsy was negative. Woohoo!

In December, I hit the five-year mark as a breast cancer survivor. Then in February, I had my yearly mammogram. There were some new calcifications and subtle changes at the site of the original tumor. So, the doctor recommended a stereotactic biopsy. I had the procedure in March. It involved inserting a hollow needle into the breast and “sucking” out samples of the calcifications for pathology examination. Then the doctor inserted a metallic clip to mark the biopsy site. If the pathology showed cancer cells, a surgeon would have used the clip as a marker to go back in and remove more tissue to ensure all the cancer was gone. Thank God, my results came back negative. I get the keep the clip in my breast, but I don’t have to have more surgery and thank God, no more chemo or radiation!

As a mammographer and breast cancer survivor, I’d like to remind all women over 40 to do monthly self-breast exams and have yearly clinical breast exams and mammograms.  My cancer was discovered on a yearly screening mammogram. I had no symptoms, no lumps, and no family history. It was an aggressive, invasive cancer and had I waited another year before having my mammogram, my prognosis would not have been as positive. So check those ta-tas ladies!

Two years ago, I set a goal to publish at least one book a year. My new goal is to finish at least two books a year. I just don’t know if that’s possible. I work full time and like to balance life with writing. Sometimes, writing takes a backseat.

Usually, a spark or just a gem of an idea will fester in my head until I have to get it down on paper. When writing Out of the Darkness, I got this idea to create a vampire who didn’t want to be a vampire. And then I decided to make vampirism a virus. Next, came the research. If vampirism was a virus, I had to know how it worked and if it would be possible to cure it. I tried plotting out the entire story, but about midway through, the characters took the story in a totally different direction and I had to roll with it. And that’s usually what happens when I plot. I get to the middle and my characters start to complain and fuss and they eventually take over the story.

I get to talk to the people in my head without feeling like a crazy person.

I like to write anytime I have the house to myself and a couple of hours to just delve into the story without distractions.

I read everything from Nora Roberts to John Grisham to Dean Koontz, but romance novels are my favorite genre whether they’re contemporary, historical, or paranormal. I just don’t read erotica. Maybe it’s my age, but it’s just not my thing.

He rolled his eyes and huffed. “Stop pretending ignorance. You know what I am.”

“A vampire. Really?” She wanted to scoff, but a chill shivered over her skin. He wasn’t dead. And she’d shot him.

Maybe he was wearing Kevlar. But wouldn’t Kevlar show through that tight-fitting shirt?

Perhaps not. Still, there had to be a logical explanation.

Ignoring the warning bells clanging inside her skull, she shoved the Glock back in its holster and reached for the beer she’d deposited on the counter. She took another long, hard pull on the bottle, hoping to douse irrational thoughts.

Despite renewed fear, she managed to set the bottle back on the counter without dropping it.

“I’d give anything to drink beer again,” he said in a reverent voice.

Amber nearly laughed aloud. Her shoulders sagged. Gerard Delaroche wasn’t a vampire, and he didn’t want to drink her blood. He wanted a beer. Like a normal guy.

Hell, he probably was normal. She was the one off her rocker.

“Want one?” She forced herself to meet his intense stare.

Like that was something a girl could forget. It wasn’t every day a hot guy claimed to be a vampire.

Hell, maybe he was a vampire. The man could stop bullets with his chest.

He took a hesitant step closer. She stiffened and took another cautious swallow of beer. He stopped three feet away. Good. Sexy and crazy was a dangerous combination.

One random commenter will receive a digital copy of Out of the Darkness or Embrace the Darkness. Just leave your email address with your comment and I’ll pick a winner on Friday, April 19.

In Out of the Darkness, Vincent was dark and brooding. Gerard had a sharp wit and sense of humor. So, do you prefer your heroes to be dark and brooding, or do you love a man who can make you laugh? 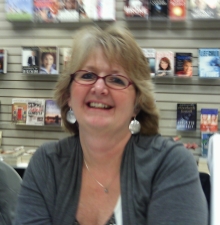 Lilly Gayle writes paranormal and historical romance. She lives in North Carolina with her husband and has two grown daughters and a son-in-law. When not reading, writing, or working as a mammographer at a local hospital, she likes to spend time with her husband at the beach.

You can find Lilly at:

You can find Embrace the Darkness at: Amazon.com

16 thoughts on “Interview With Lilly Gayle, Author of Embrace the Darkness”