I’m delighted to welcome Jenna Storm to my blog today!

Thanks, Babette, for giving me the opportunity to guest on your blog. I’m busy working on book two in my Elements series and thought it would be fun to discuss how I came up with the series premise.

The Burning Seal, a paranormal romantic suspense, is the first book. I didn’t start with a specific character or setting. Instead, it was a question that evolved into an idea.

What would it be like if major events in our lives repeated and we were given a chance to correct a failure? Hmmm. For major events to repeat the characters involved must reassemble to play out their original role. Of course, reincarnation. Now, if the same soul reborn could remember the pain and suffering from each life and carry the scars with them for each rebirth well…that would be some heavy internal conflict my characters might suffer.

Ideas continue to flow for the series, including new characters, conflicts and paranormal elements. It’s exciting to see the series develop and realize even the smallest idea when questioned, poked and prodded can expand and take on deeper meaning.

What draws you to read paranormal stories? And if you’re an author, what sparks your stories or makes them grow into a series? Setting, Character, or . . . ? 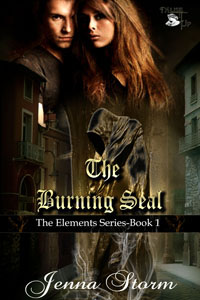 Detective Danni Keegan is plunged into a dark, demonic world where survival depends on deciphering the connection between ritual killings, and a demon terrorizing her for a “gift” she wasn’t even aware she possessed. She must unravel her dreams of another woman who lived during ancient times and battled a bloodthirsty demon—the same demon who now hunts Danni. The loss of her body and soul looms imminent as her only chance to destroy the demon depends on changing her new partner’s convictions. He is a sinfully sexy man, who exudes power and self-assurance with the ease of breathing and has an iron-willed determination not to believe in the paranormal.

He moved toward her. She couldn’t breathe for other reasons now. He placed his hand over her heart; his palm was wide enough he touched the skin exposed by the V of her shirt. Her heart jumped. Her stomach flipped and pulled. She resisted moving closer.

“If you can’t handle the case then you need to back out before Sam pulls you off.”

She stepped away. “Sam doesn’t have any reason to, unless you plan to give him one.” He folded his arms across his chest, stubborn and strong. She forced herself to speak calmer. “I know what I’m doing. I’m fine.”

He snapped, “Stop saying that. You’re not fine. Your heart’s racing. Body shaking. Your face is pale and I keep thinking you’re going to pass out at any moment.”

“It’s not easy to touch someone so evil and not be affected. Look at me, I’m not physically hurt.”

He shoved his hands in his pockets. His mouth pressed into a hard line.

With a stiff nod, he followed her to collect personal effects from their desks before departing. He was quiet as they walked to the parking lot which suited her fine since she was busy fighting powerful feelings that had nothing to do with the case. Was she the only one who felt the connection? Was it her imagination or did being with Chase feel familiar?

They stopped at her car.

“See you tomorrow.” She got in and shut the door, relieved to escape him, only to tense back up when his knuckles banged the window. She slid the key into the ignition and lowered it.

His forearms rested on the opening. His face inches from hers. “Call if you need anything.”

Her eyes had a will of their own and kept dropping to his lips. She wondered how they would feel. Would the kiss sizzle or fall flat?

“I mean it, Danni. No matter when, no matter what time.”

Was it wicked hope or had his face drawn closer to hers? She parted her lips as much to breathe through her nervousness as to finally satisfy her curiosity.

Closing the distance between them, she seized his face between her hands and kissed him. His lips opened from shock, or desire, she didn’t know. At this point she didn’t care. She took advantage and finally tasted him. Warm cinnamon. His kiss was a mirror of his personality, bold and confident. She recognized the rough feel of his skin under her palms, the pressure, and rhythm of his kiss. Why did she feel so attuned to this man?

The thought and her attraction frightened her. She released him abruptly. The car and everything around her seemed to shift, and then jerk back in place. Wow.

She rolled her lips together. His heat and taste remained on them. “Thanks. I’ll call if I need you.” She tapped the silver button so the window shot up a notch. He jerked back and stayed there until she reversed and fled the lot.

Oh man what was I thinking? Her cheeks flamed from her boldness, yet, it felt good to do something so out of character. She didn’t know where the compulsion to kiss him came from but it felt right to go with it. And to answer her earlier question—oh yeah, there was heat.

Jenna Storm grew up in Pennsylvania and moved with her family to Arizona. She has a B.A. in Fine Arts, drawing and painting but her true love is writing. She enjoys reading mythology, romance, paranormal and suspense. The more vampires, demons and mythical creatures the better. Throw in gloomy, cold weather, a soul shaking thunderstorm and she’s hooked.

You can find Jenna at:

You can find The Burning Seal at:

6 thoughts on “The Evolution of an Idea – Guest Post by Jenna Storm, Author of The Burning Seal”