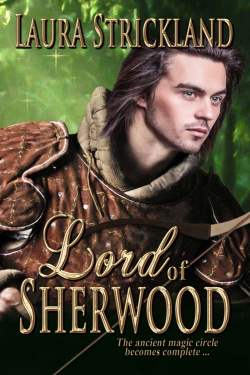 I’m delighted to welcome Laura Strickland for an interview and a look at her new historical romance, Lord of Sherwood.

Hi, Laura, so glad to have you here today. Tell us a little about Lord of Sherwood.

Lord of Sherwood is a story about the descendants of Robin Hood.  Although it’s the third book in my Guardians of Sherwood Trilogy and it completes the cycle of stories begun in Daughter of Sherwood and continued in Champion of Sherwood, this book definitely stands on its own. It features a new set of characters and tells a complete tale. So it’s not necessary to read the first two books to enjoy this one, though I do think the circle of magic becomes even more meaningful when all three books are put together.

Curlew Champion, master archer, has always known his destiny. With his cousin, Heron Scarlet, he will become a guardian of Sherwood Forest and further his people’s fight against Norman tyranny. But the third member of the triad is still to be revealed, the woman who will complete the magical circle and, perhaps, answer the longing in Curlew’s heart.

Anwyn Montfort has fled disgrace in Shrewsbury and come to Nottingham at her father’s bidding. He wishes her to make a good marriage and settle down. But the wildness that possesses her refuses to quiet. She knows she’s been searching for something all her life, but not until she glimpses Curlew does her spirit begin to hope it has found its home.

Only the magic of Sherwood can bring them together, and only their union can complete the spell woven so long ago…

It’s funny, but when I wrote the first book of this series, Daughter of Sherwood, I had no idea it would be part of a trilogy. Not until my editor at The Wild Rose Press told me she wanted to contract the story did it dawn on me that it needed to be the first book of three. My Sherwood stories contain a great deal of earth magic, and in pagan times the number three was particularly significant. The Celts worshipped a triple goddess: the Maiden, Mother, Crone, and a number of gods had three faces or aspects. In Daughter of Sherwood, the circle of magic that protects the forest must be maintained by a triad, and many important events occur at three-day intervals. It seemed very obvious to me then that the story of Robin Hood’s descendants should be told in a cycle of three tales.

At the time I proposed the Trilogy to my editor, I had no idea what should be in the second book and only a vague idea of how the cycle would end. I’m so glad she had the confidence to trust in my desire and ability to complete the project!

Right now I’m busy beginning work on a new series of Historical Romances set in Ancient Alba (Scotland) during the Iron Age. I’m hoping to tell the tales of some of the first the warriors who claimed Scotland for their own and, of course, the women who loved them.

Following the release of Lord of Sherwood, I have two Christmas novellas coming out later this year: Mrs. Claus and the Viking Ship and The Tenth Suitor, which is part of The Wild Rose Press’s Twelve Brides of Christmas series, new for this upcoming season!

I do have some exciting news! I recently signed a contract with The Wild Rose Press for my first-ever Steampunk Romance, called Dead Handsome. I began reading the genre, which was completely new to me, some time ago via my Kindle and promptly fell in love with the darkness and marginality of it.  I challenged myself to write a Steampunk Romance, just for fun, and it turned into a wild and steamy tale set in 1880 Buffalo, New York.

To tell you the truth, ideas always seem to come up with me! They occur to me at the oddest times and in the strangest places, frequently when I’m housecleaning, for some reason, driving my car or folding laundry.  Most often they’ll begin with a “what if” question, such as “what if a knight who died of the plague was revived and fell in love with a woman from our time?” and everything just unfolds from there.  I usually have many plots and schemes circling my brain the way airplanes circle an airport.  One of my favorite authors, Terry Pratchett, says something to the effect of: ideas are always falling through space like cosmic rain. Sometimes they strike somebody, sometimes not. That’s how it feels for me, like being struck by cosmic rain.

I’m an early bird, so I love to get up very early in the morning when the world is quiet and it’s just me and my dog, Shannon.  In winter, I’m up long before it’s light; my husband and I heat our home with wood so I stoke up the fire and settle with my notebook and pen (yes, I still write using a spiral notebook, dinosaur that I am!)  That’s when my imagination, and the words, truly fly. In summer I love that early time when I hear the first birds begin to sing and the light turns from dim to gray and then to golden as the sun rises. It’s almost as if time becomes suspended then.  An hour can be a half hour or three hours long as I travel in my mind. To me, this is the very heart of being an author, and why I write!

My very favorite scene from this story is near the beginning, when the heroine, Anwyn, disobeys her father and runs amok on market day outside Nottingham Castle. I love the color and vibrancy of it, the descriptions of all the ordinary folk who’ve come to trade, and Anwyn’s restless, irrepressible spirit.  She buys herself a sticky bun, steals a ribbon (just to see if she can, and she pays for it after) and trades a kiss to a farmer for his flagon of ale. I think on some level, I’ve always wanted to be as footloose and unfettered as Anwyn is in that scene!

This is a difficult question, as I actually have four favorite places: Newfoundland, Canada where my mother was born; Glen Etive in Scotland; the west coast of the Kintyre peninsula, also in Scotland and my own property, located about nine miles south of Lake Ontario in New York State. I love them all for similar and dissimilar reasons: they’re the places I feel most at peace and they share a depth of natural beauty that feels almost magical to me. If I had to choose just one, I’d choose home: after all, I only need to step outside to be there, and also my beloved, now departed pets are buried there. Hallowed ground!

2. Listening to Pandora radio while I edit.

3. Chocolate in almost any form, though I must admit a partiality to Cadbury milk chocolate … yum.

And now Laura has a question for you all: Do you believe true love can transcend death and survive over time, that two who loved in one life might meet and love again?

Curlew bowed again. When the man reached Nottingham and inquired after an under-forester called Champion, he would know this meeting for a farce. But Curlew would be well away by then.

A small, wicked smile tugged at one corner of his mouth. He straightened from his bow just as the young woman’s cart reached him. Any well-behaved Saxon underling, as Curlew well knew, would avert his eyes respectfully as she passed. Instead, he lifted them to hers.

And, shockingly, she returned his stare, bold and unswerving as any lad. Nay, not like a lad though—for she was all woman, this one, her face brimming with character, interest, and mischief. A smile twitched her lips as their eyes met and held—it said many things: that she knew he had just spun a fabrication, that she applauded him for it, and that she found him just as fascinating to look upon as he found her.

His blood leaped at that look and he condemned himself silently. This, a well-bred Norman miss, was surely no proper object for his admiration. Only, she did not appear particularly well-bred nor well-disciplined. Who was she?

And would he ever see her again?

Curlew stood there with the blood drying on his hands as the small train lumbered past, grateful for his escape, and utterly scorched by her gaze.

Not until they were well past did he draw a deep breath and strive to shake off the spell that held him.

You can buy Lord of Sherwood: the Guardians of Sherwood Trilogy Book Three at:

Bio: Born and raised in Western New York, Laura Strickland has pursued lifelong interests in lore, legend, magic and music, all reflected in her writing. Though her imagination frequently takes her to far off places, she is usually happiest at home not far from Lake Ontario with her husband and her “fur” child, a rescue dog. Author of Scottish romance Devil Black as well as The Guardians of Sherwood Trilogy consisting of Daughter of Sherwood, Champion of Sherwood and Lord of Sherwood, she is currently working on the second book of a new Steampunk romance series.

You can find Laura at:

8 thoughts on “Interview With Laura Strickland, Author of Lord of Sherwood”