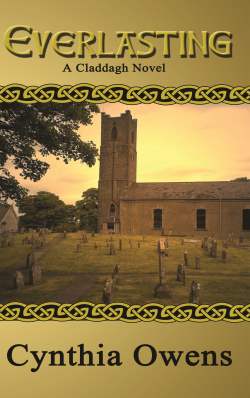 Hi Babette, and thank you so much for having me as a guest on your blog! It’s lovely to be back again, and I’m so happy to announce the release this month of Everlasting, the fourth book in the Claddagh Series. It’s been a while since we’ve visited Ballycashel, the setting for the first two books in the series, but it’s wonderful to be back.

Shannon Flynn, my heroine, was wonderful to write. She’s lovely, spirited, stubborn and determined. Her hero, Liam Collins, was just as much fun, romantic, teasing, brooding and protective, he epitomized the kind of hero I could easily fall in love with—okay, I did fall a little in love with him.

As a reader, I always prefer stories that are character-driven rather than plot-driven. Getting to know the characters of a favorite book is almost as good as getting to know new friends. And as a writer, I try to get deep into my characters’ psyches so that I can make them as unique and three-dimensional as I can.

Character Interviews: Before (and during) my writing process, I interview my characters. I have a set of standard questions for them, from their favorite foods to their favorite music. But then I delve deeper, asking them about their best and worst memories, the people who, for good or ill, influenced them most, their deepest fears and greatest ambitions.

These interviews are helpful. Sometimes they help me work out a character’s backstory, and other times they’ll help me plot (though I’m a pantser who rarely plots more than a chapter or two ahead). And sometimes they surprise me, and force me to take a story in a completely different direction.

It’s at that moment, the moment I feel as if I’m channeling these characters, that I know I’ve got them down.

Here are five things about Shannon Flynn and Liam Collins that I learned while doing these interviews.

1. She’s a tomboy. She loved to fish with her father and can shoot a slingshot with unnerving accuracy.

2. She loves to dance. On a Sunday evening you’ll find her at the local crossroads dance, and she never lacks for partners.

3. She knows all the old stories of Ireland’s past. Her father told them to her when she was a child, and she’s never forgotten them.

1. He’s a follower of The Liberator, Daniel O’Connell, and his peaceful struggle for Ireland’s freedom.

2. He carried a blanket from Spain to Ireland, which he uses as a bed cover.

3. He has a sweet tooth and a deep fondness for chocolate.

I hope these details will bring Shannon and Liam closer to you. And I hope you’ll enjoy this excerpt from Everlasting.

A Giveaway!  I’m giving away reader’s choice of a signed print copy of one of the Claddagh stories: In Sunshine or in Shadow (Book I) or Coming Home (Book II) or Playing For Keeps (Book III) What’s the one thing you’d like to reveal about yourself that no one (or few people) know?

Where does justice end and retribution begin?

She was driven by anger

When her fiancé died trying to feed his family, Shannon Flynn vowed to punish those responsible…even if it alienated her from her family, even if it put her—and them—in danger.

He returned to exact revenge

Eight years after he was forced to flee his beloved Ireland, Liam Collins returns to Ballycashel to find his family devastated and the person he holds responsible for his exile dead.

Can these two wounded spirits come together to battle a common enemy? Or will anger and pride destroy them both?

“I see them! Sweet Mary be praised, they’re safe!”

Shannon Flynn gripped her mother’s hand so tight she felt the bones crack. On Ma’s other side, her sister Peggy let out a harsh sob. Little Fiona stood a few feet away, white-faced, hands pressed to her mouth in silent horror.

Icy needles of rain slashed Shannon’s face, and though they stood well away from the waves, she could still feel the sting of the sea, taste its sharp, briny tang. She blinked hard against the cloying mist. Was that really the Noreen, Da’s currach? That tiny craft bobbing over those vicious waves, helpless as a cork?

She flinched as the little fishing boat disappeared from view.

“They’ll be fine.” Nora Flynn’s voice rang out, stern and bracing even as she kept her gaze riveted on the storm-tossed sea. “Sure, yer da knows these waters better than anyone. He’s been through many a storm worse than this. He’ll be fine.” Her voice teetered on the edge of despair as wind and rain scored them with merciless claws.

He’s never had Mike with him.

The boat reappeared, teetered at the crest of a towering wave and tumbled sideways. Nora cried out once, pressed her fist to her mouth. The anguished sound echoed in Shannon’s heart. Before she could react, Nora drew a deep breath and set her shoulders. “Come ye, now. They’ll be needin’ us.” She threw a sharp gaze to her two younger daughters. “Peg, look after Fiona. Shannon, come with me.”

Hand in hand, they raced into the sea.

Shannon’s breath gushed from her lungs in painful gasps as icy water clawed up her legs and tangled in her long skirts. Had the sea ever been so vicious and cold? The waves so high? Oh, where was Da? Was he safe?

She clung to her mother’s firm, strong hand as she slipped and almost fell on the sea-drenched shingle and sand. Thick strands of seaweed twined about her legs. Ma pulled her to a stop, her hoarse cry snatched away by the shrieking wind. Could Da and Mike triumph over the furious sea?

Sweet Mary protect them. Keep them safe. Bring them home.

Two heads, one dark and the other fair, burst from the waves, went under, surfaced again. Oh, God, was it possible? Could they really be farther out? The sea clawed greedily at them, pulling them under, down and down. Away from her. The wind tore her hair from beneath her red headscarf, and she lost sight of them for a moment. She swiped the flying strands away, staring harder through a stinging mixture of rain and fog and tears.

Dear sweet Lord, where are they?

“I see them! There’s Da!” Fiona appeared beside them, fighting to stay on her feet as a wave broke over her shoulders. She pointed a trembling finger. “Look, there’s Da!”

“Fiona, get back!” Shannon fought to make herself heard over the crashing waves and the devil’s howl of the wind.

Mike can’t swim! Even as icy realization swept over her, Shannon knew her father would fight to the death to save him.

She squeezed her eyes shut, fighting back the tears.

“Tom, look out!” Her mother’s scream reached above the greedy fingers of sea foam just as a mighty wave knocked Da under once again.

Please God… Please God…keep him safe. Keep them both safe.

Da stared into Ma’s eyes, touched her cheek. “Noreen. Ah, Noreen. The currach’s torn to pieces, so it is, but sure, we’re all right now.”

“Da?” Her own eyes wide and dry and burning with salt, Shannon searched her father’s beloved face, saw his anguish.

Fissures shot through her heart.

“Mike?” Shannon scanned the beach in desperation. The gray sea roared and frothed wildly. The broken currach lay on the strand like an exhausted shark. Rain and tears blurred her vision. “Da? Where is he? Where’s Mike?”

“Gone? No!” Her heart ceased to beat. Something was strangling her. Ice held her feet frozen to the beach even as she swayed drunkenly.

“I’m sorry, a storín, so sorry, my dearest. I did everything I could.” Dimly, she saw her father release her mother, move toward her. “But I couldn’t save him for ye.”

He reached for her, his big hands open, his face etched with grief. She flung up her hands, shook her head. Denying. Denying. No. No!

Then she spun away, ran from her father to mourn alone the loss of the man she loved more than life itself.

In Sunshine Or In Shadow (Book 1) 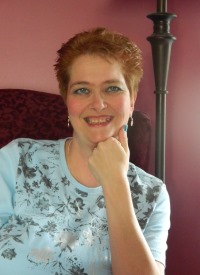 I believe I was destined to be interested in history. One of my distant ancestors, Thomas Aubert, reportedly sailed up the St. Lawrence River to discover Canada some 26 years before Jacques Cartier’s 1534 voyage. Another relative was a 17thCentury “King’s Girl,” one of a group of young unmarried girls sent to New France (now the province of  Quebec) as brides for the habitants (settlers) there.

A former journalist and lifelong Celtophile, I enjoyed a previous career as a reporter/editor for a small chain of community newspapers before returning to my first love, romantic fiction. My stories usually include an Irish setting, hero or heroine, and sometimes all three.

I’m the author of The Claddagh Series, historical romances set in Ireland and beyond, and The Wild Geese Series, in which five Irish heroes return from the American Civil War to find love and adventure.

I’m a member of the Romance Writers of America, Hearts Through History Romance Writers, and Celtic Hearts Romance Writers. A lifelong resident of Montreal, Canada, I still live there with my own Celtic hero and our two teenaged children.