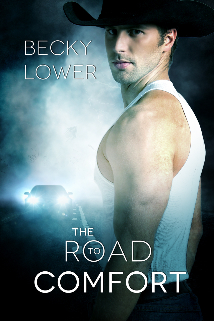 I often compare the process of writing to other things that need to be pieced together—quilt blocks, jigsaw puzzles, or railroad cars. It is true that a novel consists of a multitude of ideas, bits and pieces of backstory, plot contrivances and major turning points. But when people ask authors where their ideas come from, do you have a neat, pat answer?

I certainly don’t. I dabble in both contemporary and historical romances. The historicals are easier in terms of formatting, since there is actual history involved, which dictates the action to some degree. But my contemporaries? Those are a different matter altogether.

Take, for example, my novel, The Road To Comfort, due out in March, 2014, from Soul Mate Publishing. It’s about a 40-something woman who becomes an empty-nester after her only child marries. Free from responsibility for the first time in her life, she jumps into her car for an unplanned road trip. But things don’t go as planned. Or unplanned, if you will. Cowboys, horses, tornadoes and Harleys get in the way of her little diversion.

How did this plot get pulled together? The first thing was the title. It’s odd that, for my contemporaries I start at that point, where with my historicals, I sometimes don’t know the title even when I submit the story to my publisher. But the words jumped off a billboard on a trip from Virginia to Ohio. The Road To Comfort. There is a town in Texas called Comfort, but I didn’t want an actual place in which to set my scene. I created my own Comfort. In Nebraska, in the heart of Tornado Alley. And, of course, I needed a cowboy with a sad story. And a horse named Bud. Ideas came whirling at me like a tornado once I found the title.

I melded these various story lines together to form my own plot, with various twists and turns to make my story different from the norm. I drew on people I’d met during my stay in Texas, factored in some characteristics from relatives in Oklahoma who have lived through many a tornado, got schooled in motorcycles from an old high school friend I recently became reacquainted with, and blended it all together. So, how do I neatly boil it down to one sentence, when someone asks me where my ideas come from?

How do you answer the question? One lucky commenter will win an E-book copy of The Road To Comfort.

The Road To Comfort

Juliette St. James has only done two impetuous things in her life. The first resulted in her becoming a single mother at age 18. Now, she’s embarking on a cross-country trip to celebrate becoming an empty-nester. Not sure of what she will do now that she’s flying solo, she comes face-to-face with her worst nightmare—a cowboy.

When ex-bull-rider Cyclone Kelley heads out on his horse, the last thing he expects to find is a damsel in distress parked alongside the road. Especially one that resembles his first crush—Brigette Bardot. He doesn’t need or want a complication in his life. His wife died while he was chasing the elusive dream of fame and fortune on the rodeo circuit. Blaming himself for her death, he quit the rodeo and returned to Nebraska. Now his mantra is “love them and leave them smiling.”

They are attracted to each other and decide a one-nighter would be a good idea. After all, what happens in Comfort, Nebraska, stays in Comfort. But when Juliette’s car gets sucked up in a tornado, she’s forced to spend a week in the town instead of just one day. While neither denies their attraction, they both realize that a week together will change the course of their lives forever. They are both forced to decide if love is worth gambling on what could be. Or if tornadoes, and Cyclones, are better left alone.

Juliette St. James had only done two impetuous things in her life. And, from the billowing cloud of black smoke belching out from under the hood of her car, the second one was no wiser than the first.

The first occurred twenty-three years earlier when she shared one night with a handsome stranger, which resulted in becoming a single parent at the age of eighteen. The second, taking a cross-country road trip on her own to celebrate becoming an empty-nester, was turning out to be every bit as ill-planned.

She nudged the car to the side of the road and cut the motor, thinking maybe she should get out of the car before it caught on fire. Or before the noxious fumes the fire was causing made her pass out, in which case she’d literally be toast. Fighting against the uneasiness beginning to nibble at the corner of her brain, she quickly stepped out of the car and glanced at the surrounding landscape. Row after unrelenting row of corn surrounded her. Not a landmark in sight. Hadn’t Stephen King written something about monsters coming out of the cornfields? Not the image she should be putting into her already over-active imagination. What she needed to do was call for a tow truck. What state was she in, anyway? Nebraska? Oklahoma? Kansas? They had all blurred together over the past day and a half.

Having a plan of action in her mind, finally, she leaned in through the open window and reached for her enormous purse lying on the passenger seat. She rummaged through it, pulled out her cell phone and turned it on. No signal. Oh, great. Even if she did know where she was, she couldn’t call for help. Wonderful.

What to do? She couldn’t get back in her car and huddle there forever, even though the smoke was beginning to taper off. She’d just have to start walking, children of the corn notwithstanding. Grasping the door handle, she hesitated as a fat drop of rain fell onto the car’s windshield. Very dark clouds were quickly moving in from the direction she had been headed when her car finally gave up. If it had been a dog, her car would now have rolled over alongside the road, wheels spinning in the air. She glanced at the sky. It remained sunny behind her. If her car had still been working, she’d turn around and head back the way she came, maybe outrun the rain. What kind of storms did they have in this part of the country, anyway? Tornadoes? Cyclones? She drew in a breath.

Maybe she should get back in the car. At least, with the rain, the immediate threat of a car fire was obliterated. The clouds on the horizon outmatched the one still billowing slightly from under the hood. They did mirror her thoughts though, as she mentally kicked herself, locked in a state of indecision. Why had she taken off on a whim anyway? On a trip to nowhere? By herself?

It was so unlike her normal controlled world. She wanted to shake herself for being so impulsive. But then, it wasn’t every day that her son got married and left home. Leaving her alone. She was all by herself, for the first time since she was eighteen. She obviously didn’t know how to act, making decisions based solely on what she wanted. It was a luxury she hadn’t ever before experienced. And she botched the very first one she’d made. What had she been thinking?

Sure, she’d had a grand time of things so far. She’d let her hair stream down instead of putting it into her usual bun; she’d turned up the volume on her car stereo and sang along at the top of her lungs with Adele and Bruno Mars. Trips inside various quick-stop grocery outlets meant that all kinds of junk food filled her car to overflowing. Her arm dangled out the window, outrageously in violation of her admonition to her son over the years not to ever do that, since you never knew when a dog would come along to bite it, or a passing vehicle would get too close and rip it out of its socket. She’d basically thrown her rigid common sense to the wind on her wild trip, and now she surveyed where her impulse had gotten her. She was in the middle of nowhere.

Becky Lower has traveled the country looking for great settings for her novels. She loves to write about two people finding each other and falling in love, amid the backdrop of a great setting, be it present day middle America or on a covered wagon headed west in the 1850s. Contemporary and historical romances are her specialty.

Becky is a PAN member of RWA and is a regular contributor to USA Today’s Happy Ever After column. She has a degree in English and Journalism from Bowling Green State University, and lives in an eclectic college town in Ohio with her puppy-mill rescue dog, Mary. She loves to hear from her readers at beckylowerauthor@gmail.com.

You can find Becky at:

2 thoughts on “Putting All The Pieces Together – Guest Post by Becky Lower, Author of The Road to Comfort”