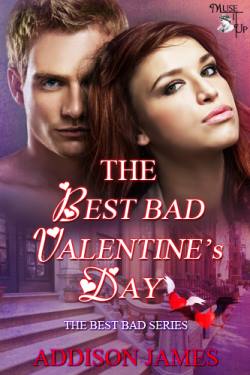 The older I get, the less I celebrate Valentine’s Day. Of course I remember to buy cards and candies for my kids and my mom, but I don’t get all stressed out over it, like I used to do for Valentine’s Day and that other day that sent singles into a tailspin–New Year’s Eve. As a romance writer, of course I love having a day to celebrate love, but as I approach my 50th Valentine’s Day with my partner of nearly two years, things are definitely mellower than in my 20s. Thank goodness!

At 50, I don’t need a certain day for my man to tell me he cares about me. He does it in little ways every day, like fixing things around my house, really listening to me when I talk, and treating me with respect. In twenties, I was interested in looks. In my thirties, it was career potential. In my forties, I was busy trying to raise kids, have a career and keep the marriage strong. At fifty, I wouldn’t say I’m older, but much wiser. I can spot a self-centered man on the first date. I can tell from a kiss if a man will be generous with his affection.  I can tell from dinner conversation if he’s open enough to listen to my life story or just interested in telling me his. And I just can’t be bothered with compromising.

My boyfriend is not romantic. He’s an engineer who’s famous in his specialized field. And he hates Valentine’s Day. He’ll go on a rant in a moment’s notice that it’s a manufactured holiday and lacks spontaneity of love.

And I don’t care. You know why? He shows me when it counts.

Turning 50 means having a certain medical procedure that no one enjoys. I was told quite firmly by the doctor’s office that I need to have someone drive me home and stay with me for two hours after the procedure to make sure there are no complications. The procedure was scheduled for about a minute past sunrise and I drove myself to the doctor since I could not fathom asking anyone for such a big favor like waking up before dawn to drive me to the doctor while I was tired and cranky and hungry and thirsty. However, my beau, when I just happened to mention to him what I needed, he immediately volunteered, without an ounce of hesitation. I kept asking, Are you sure? It was like asking for someone to help you move. Are you quite sure? He said yes, of course. And that was my Valentine’s Day gift. A man who took me home from recovery while I was groggy and stupid and could barely put two words together, who  put me in bed and stayed in my home, and checked up on me,  making sure I was okay. That tops a heart shaped candy box and a bouquet of overpriced roses any day!

A Giveaway! I’d like to give away a free PDF copy of the book to a randomly selected commenter. What are your favorite little ways your Valentine shows he cares?

Blurb: A fall during the height of passion fractures Susan’s tailbone disrupting romantic Valentine’s Day plans for Susan and Roger.  Can they avoid the gossip in their small Vermont town? Will they have a chance to rekindle the passion? And what mischief does Susan’s best friend, Terri, have in store this time?

“Now, where were we?” Dr. Lane asked a question but clearly he already knew the answer, as evidenced by his rapid return to Susan’s side, his hands removing her remaining clothes and his lips capturing hers. Soon, both their clothes pooled at their feet.

“No, here,” Roger said as her pressed her firmly against the wall, but his collection of paintings of Vermont landscapes from local artists shook with their passion.

“Damn,” he said once he noticed the quivering frames.  Susan looked at the painting just inches from her head and exhaled angrily.

Roger looked around the room with new eyes. His furniture and objet d’art were no longer just about their original function or placement for flow in the room. He assessed each area, each piece of furniture with only one purpose in mind, and certainly not the purpose it was originally created for.

“Here.” Roger took his arm and pushed away the candles from the large wooden dining room table. It was formerly a barn door that Roger had resurfaced for its new purpose. Multiple purposes.

Roger answered by grasping her shoulders, passionately kissing her lips whilst moving her backward toward the table.  Her backside soon met the side of the table, as Roger lifted her on top of it.

Susan looked at her lover with a mischievous eye. “Really?” she asked, her voice suddenly deep and breathless.

“Really.” He paused from kissing her to answer, as he slowly, carefully, lowered her against the tabletop, and then moved on top of her.

Their passion steamed up the windows of his nineteenth century home.

“There’s a first time for everything,” Roger replied with  more kisses.

Their passion caused the table to creak.

As they were reaching their peak, everything seemed to slow down. Before, rushed and frantic, their passion seemed to speed up time. It began to move incredibly slowly once Susan realized that she was no longer on the table, but rather in mid-air with a one hundred and eighty pound doctor on top of her. One second her passion was so intense, she thought they were like weightless astronauts somersaulting through space and time. The next second she realized there was nothing beneath her. Unable to brace herself because her arms were still entwined with Roger’s, she crashed onto the hardwood floor directly onto her tailbone.

Pain. Extreme pain shot from the base of her spine radiating down her legs.

You can find The Best Bad Valentine’s Day at:

Bio: Addison James spent her childhood with her nose in a book, ignoring the natural beauty of her native Vermont.

She went to the right schools, got the right jobs, and spent her early adult years being responsible and stable. A few years ago, her long repressed urge to write emerged and she has been feeding it ever since.

You can find Addison at:

1 thought on “A Valentine for a Half Century – Guest Post by Addison James, Author of The Best Bad Valentine’s Day”