Hi Angela, and welcome. So, tell us, what’s Silver Blade about?

Thank you so much, Babette, for having me. It’s a romance, the story of how Oz and I met. Of course, it’s not all mush and stuff, Oz has to fight a few demons first.

What did you think of Oz when you first saw him?

Well, I actually first saw him when some guys ran him and his motorcycle off the road.  So between the riding jacket, gloves and helmet, I couldn’t see a darn thing.

So it wasn’t love at first site. How about the second time?

Oh my God, Babette, it went from one extreme to the other. The next time I saw him he was wearing nothing but these tight black boxer-briefs. I couldn’t concentrate.

And you’re from Vegas, right?

Yeah, so you’d think I’d be used to semi-naked men, but he was just Wow!

What about Oz, do you think he’ll like Vegas? Or let me put it differently, if you and Oz could live anywhere in the world, where would it be?

I’d love to live on a little island, just Oz and me. Someplace where there aren’t any demons.

What hobbies do you do to relax?

I’m learning to shoot a gun and ride a motorcycle. (laughs) Neither is very relaxing though.

If Silver Blade were made into a movie, who would play you?

Charlotte has already told me she thinks Piper Perabo would be good.  I just saw her in Looper, I think she’s prettier than I am so I’m flattered Charlotte would think of her.

Canada, Greece and Scotland.  Oz and I talked about taking our motorcycles to Canada once I’m comfortable riding my own bike.

Lip gloss and a gun. Oz insists on the gun now, just in case.

I love a good steak.

Well, thank you again, Angela, for stopping by to visit. Before you go, how about giving us peek at Silver Blade, tell us a bit about Charlotte and where we can find you both.

Charlotte and I would like to thank you again, Babette, for allowing us to visit today.  And we’d like to ask your visitors: if a movie was made about their lives, who would they pick to star?

Charlotte will be giving away a pdf copy of Silver Blade to two readers randomly selected from all of those who leave a comment for her on the blogs she’ll be visiting during her tour. (Visitors can have multiple entries if they comment at more than one blog. Dates & sites for Charlotte’s tour can be found on her website.)

Oscar McAvoy hunts demons. Chosen to rid the world of evil, he nevertheless condemns himself as a murderer. When saved by the beautiful Angela Knight, he judges himself undeserving of love.

Angela Knight is on the way back from her brother’s funeral when she stops to help a fallen motorcycle rider. Her body responds to the handsome stranger, a man whose scars and tough exterior suggest a rough and dangerous life. When she can’t stop thinking about him, Angela must decide if she is willing to give the sexy, mysterious stranger a chance.

Love chooses us; we do not choose who we will love or who will love us.

“Hey,” Oz said as he came around the corner with the sheriff. The officer continued on his way to the nurses’ desk.

The big biker was a comical sight—too-short medical pants, motorcycle boots, bandaged ribs, and a leather jacket. She bit her lip to hide her laughter.

“Thanks for the sympathy,” he said as he looked down at himself. “It’s either these or back to my briefs. I don’t think the sheriff would like me to walk around in those. How about you?”

Angela felt her cheeks grow warm. She dropped the magazine back on the table and stood up.

“You look fine. No one else will laugh. The bandages will make people feel sorry for you, even if the pants don’t.” She bit back another laugh.

“So, what are you still doing here?”

She had asked herself that same question half a dozen times in the last hour. She knew nothing of the giant man whose body suggested a rough and dangerous life, but she had always found it unfair that people misjudged her brother Bobby. She was not about to do the same. Yes, Oz might look dangerous, and his job might be dangerous, but that didn’t mean the man himself was a threat. And something about him intrigued her. 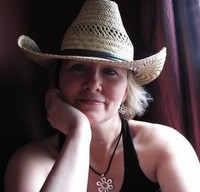 Bio: Charlotte lives in Stouffville, Ontario with her husband, daughter, and two part-time step-daughters.  When she isn’t working at her full-time job or driving her daughter around for volleyball, she likes to craft, read, go to movies, and, of course, write.

Charlotte admittedly tries to juggle far too many balls at once while working on a series of (mostly paranormal) romance stories. She hopes to have all of these stories published some day because, as a romance writer, she believes in happy endings!

Charlotte can be found at the following:

You can find Silver Blade at: