Time to get introspective…

Icy Snow’s next novel’s coming out in June.  It’s a re-issue by Class Act Books of a novel formerly released by another publisher, and will be in both in Kindle and trade paperback.

That made me think about all the novels I’ve written as Icy Snow Blackstone, and that led to the following egotistical brag-fest.  After all, there just might be someone out there somewhere who actually is curious about The Compleat Icy Snow Blackstone Bibliography. Of course, there are probably just as many who couldn’t care less, but to coin an Old Southern phrase, “I’m not studying them.”  For this little bit of epistolatory edification (and can’t I use five-dollar words?) I’m concentrating on those of you with inquiring minds who really want to know.

In chronological order, those epistles are:

They’re all romances, but there’s also a variety of subgenres here.  The Irish Lady’s Spanish Lover is a contemporary vampire story set in Ireland.  Gypsy Charm is paranormal, also, but a lighter version of the shapeshifting variety. Bargain with Lucifer and its sequel Brother Devil are contemporary romances of the almost-erotic, hot-and-heavy kind.  Runaway Brother is contemporary also but lighter with a few laughs included. Jericho Road is set in Georgia during the Vietnam era with plenty of Southern-style lovin’. The Earthman’s Bride is science fiction of the space opera kind.

This upcoming novel is called Three Moon Station. It’s what I like to term a SF Western because it takes place on another planet, a primitive place where the settlers own shuttles but use horses and wagons most of the time. They wear laser pistols on their hips, fight off rustlers, and sometimes justice is swift without calling in the Federation-appointed marshal.

Three Moon Station was inspired by a made-for-TV movie I saw in 1989. Murder on the Moon (also known as Murder by Moonlight), stared Brigitte Nielsen, Julian Sands, and Gerald McRaney, and was the tale of Soviet/US astronauts on the moon trying to solve a murder happening in their midst.  One thing striking me during the story was that back on Earth, a scientist is missing and one of the investigators says, “Why on Earth couldn’t we find him?  Because he isn’t on Earth.”  Or words to that effect.

My hero came courtesy of Tom Selleck’s performance in Quigley Down Under, a “Western” set in Australia. It was very easy to envision Matt Quigley as Sarkin Trant.

So…if you were a witness to a crime and no place on Earth was safe for you, what could you do?  If you lived in a time of space travel, the answer’s  simple…you leave it.

That’s what Katy Rawls does after she witnesses a murder and is chased by hitmen because she has a vital piece of evidence.  It’s by accident, because Katy really intends to take a subway tram to the local police station but Fate and the fact that she doesn’t have her purse, sends her onto a train headed in the opposite direction, toward a shuttle bound for Tritomis-2. Here, I decided to take a bit from another movie, Westward the Women, a 1951 tale of “mail-order” brides…with a twist, of course.  The train’s filled with women and Katy doesn’t find out until it’s too late that her fellow passengers are all prisoners, being sent to the pioneer planet to be ‘domestic engineers” for the men living there.

That difference in definition will leads to some problems for Katy who is already pretty unhappy about being put into stasis for four months. The fact that the guards on the ship believe she’s a prisoner, too,  doesn’t sit too well. The trouble is, Katy looks too much like a woman called Kathleen Rawls who robbed a bank, but she takes Kathleen’s place because she doesn’t want to be mowed down in a stream of laser-fire by the pursuing killers.

When they arrive on Tritomis, an auction is held and each woman goes with the man who makes the highest bid. When Sarkin Trant engages in a bidding duel with another station owner for Katy and wins, she signs the contract given to her.  Only when she arrives at his ranch does she realize he’s “bought” her to be his wife, and thereby hangs the rest of the tale…

“…an out of this world must read…so well written that it’s a bestseller contender, one that I would proudly display in my personal library.” — Long and Short Reviews

“If you like epic style romance that leaves you with warm fuzzies and a desire to revisit the characters, and who doesn’t, you’ll love 3 Moon Station.” – WRDR Review

The back flap of the wagon was thrown open with such violence that she jumped.

Trant flung himself inside, closing it again before the rain could follow. He landed on his back on the mattress, sat up and leaned forward. Water poured off the brim of his hat and he snatched it off, dropping it onto the wagon bed. Pulling his braid over his shoulder, he began to wring it between his hands. Water ran through his fingers and dripped onto his shirt.

“Oh, God. I’m wet to the skin!” He released the braid and began to unbutton his shirt.

“What’re you doing?” Remembering his earlier hesitation in removing his coat, she was startled.

“Taking off m’shirt. I’m soaked and the temperature’s dropping. You’d na want me to catch pneumonia, wouldya?” The shirt was open and off and thrust at her. “Hang that up, wi’ya?”

Wildly, she looked around, saw a hook on one of the staves of the wagon’s roof and hung the shirt on it, turning back to look at Trant again, or rather, at his bare back.

My goodness, his skin’s beautiful! It was a golden, even tan, smooth and unblemished, looking like wet satin with the rain’s moisture beading on it. His braided hair burned copper against that gold, the damp ends clinging to the small of his back…

The small of his back ? Oh, no—he’s wriggling out of his jeans! The strangled sound she made stopped his movement. With the jeans halfway off his hips, he paused to look back at her, frowning a question.

“Cold…you’re cold…” She snatched up a blanket and thrust it at him, knowing she was babbling. “Blanket…here… Cover up… I-I mean, wrap up.”

With a slightly confused nod of thanks, he took it, draped it over his shoulders and proceeded to remove the jeans.  His boots and gaiters were laying nearby. He’d probably taken them off while she was busy with his shirt. He’d also hung his gunbelt and hat on another hook as well.

The jeans found their way into her hands.  Lord, wet denim’s heavy! She pushed a hook through a belt-loop and left them hanging, water dripping onto the edge of the mattress. Once more, she turned back to Trant. He was shivering, huddled under the blanket, shaking so hard his shoulders were bouncing. “Don’t you have any extra clothes?”

Any fear his lack of clothing gave her disappeared. How can you be afraid of someone when he’s naked, wrapped in a blanket, and shivering so violently he can hardly speak?

There were two blankets left.  Picking up one, she knelt beside him, putting it over his head and attempting to towel-dry the sopping hair. After a few minutes of brisk rubbing, she pulled it aside to let him come up for air, then started in again, only to have him exclaim, “Mercy! Sunshine, please! I can stand the hair. ’Tis m’body that’s freezing!”

Without answering, she flung the corner of the blanket aside, and applied the one she held to his left shoulder and arm. His skin’s so cold. It feels almost icy. She continued to rub his arms, pulling away more of the blanket, ignoring the cry of protest he gave as the chill air struck his body, as well as the fact that it left him sitting almost naked before her.

Somehow the blanket found itself across his lap as she worked her way around him. At last, she was kneeling in front of him again, between his bent knees, patting the matting of damp curls on his chest. His skin was warmer now, and he’d stopped shaking. In fact, he was looking up at her with an expression she could only describe as thoughtful, if she were being polite, calculating, if she wasn’t.

“Why do we na lie down, Sunshine? Share a little body-heat?”

She was now very aware of their positions, the sudden warmth radiating from his body, and the way the thick copper hair on his chest narrowed into a dark red line before disappearing under the blanket on his lap, a blanket that suddenly quivered slightly.

Rocking back onto her heels, Katy regained her balance and stood up. “I think you’re warm enough.” She retreated behind him to the back of the wagon and her own corner again.

He sat with his hands clasped together, resting over the slight bulge in the blanket, not looking at her, but saying to the wall of the wagon in a slightly strained tone, “Aye, I’m thinking the same thing.” He managed to bring the blanket up and over his shoulders without her seeing more than a single bare hip. “We may as well ge’ some sleep. We’ll na be doing any more traveling tonight.”

“But, after the rain stops—”

“The track’ll be too muddy. The sun’ll have to dry it first. We’ll move again in the morning. Hand me that last blanket, wi’ya?”

Picking it up, she shook it open. He took it and spread it over his legs.

“’Tis big enough for two.” He looked at her expectantly.

He wants me to sleep here? With him naked and only that blanket between them? Where else could she sleep? Outside? On the wagon seat? Both very wet, very cold, very unpleasant choices.

Defeated, she sat down beside him, wrapping her own blanket securely around her, and pulled up the other one. For a moment, they stared at each other. At last, Trant said, “Lie down, Sunshine. I know you’re tired and I am, too. Besides, a wetting like this seems to sap the strength from a man. And…” he rolled onto his side, his back to her. “This is no the place to be starting anything.” 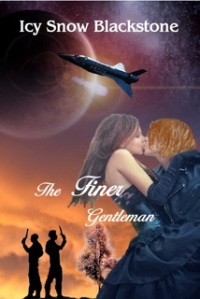 Three Moon Station, re-edited with additional material, will be released in June by Class Act Books. It will be followed by In This Kingdom by the Sea in July. The third entry in the series is The Finer Gentleman.