Thank you, Babette, for having me here today. I’m so excited to share my new release with your readers. She’s Going Home is about two former loves finally getting their second chance at true love. I love reunion romances and I really enjoyed writing Nick and Angie’s story.

Their book came to me months before my family and I were set to move. The concept of home and Angie’s search of it really mirrored my own quest to create one for my family. Moving every few years for my husband’s job really demonstrated to me that home is more than just a physical location. It takes family and friends, a feeling of security and belonging. Just like Angie, we found all of these in the salty air and sandy beaches of New England. Of course, the journey to settle isn’t as easy for Angie. Going home involves more than just falling in love again. It’ll take all Nick has to finally show her that there’s more to their future than the past. Reconciling with her mother and making up for past mistakes are also hard stops along the way. The excerpt I’m sharing today is the first time Angie and Nick have seen each other in ten years.

I hope you’ll enjoy and I’d love to hear what you think makes a house a home. Family? Friends? Your favorite arm chair? The sound of the ocean? Bird calls? The sound of traffic?

Will their second chance at love end up just the latest in a string of disasters?

Ten years ago, Angie left the coastal town of Easton, Rhode Island, for calmer waters. She didn’t find them. Now a failed marriage, a stint in rehab, and a baby belly are all she has to show for her time away. The last thing she needs as she speeds back into Easton is Nick Forest welcoming her in his police cruiser.

Nick grew up fast when he discovered he’d become a father as a teenager. He’s created a responsible life but he hasn’t had a second chance at love since Angie left town. He’s sure he doesn’t need it until a routine stop has him falling for her all over again.

Angie’s baggage is more than most men could handle, but Nick is intent on finding his way back into Angie’s heart. Her trust is harder to gain, and it will take more than just a walk down memory lane for Angie to finally come home.

Warning: Caution, small town ahead. Where nosy friends stay loyal, family always interferes and a gorgeous man in uniform is more than willing to protect and serve the girl of his dreams.

Just perfect. Five minutes in Easton and sirens announced Angie’s homecoming. She could still see the official welcome sign in her rearview mirror. This was definitely not how she’d planned her big arrival. Her chest tightened with the familiar worry. Money. A speeding ticket would break her tight budget.

Moving back had not been a strategic decision. Going by instinct alone, she had made a plan and refused any thoughts to the contrary. She was determined to find a safe place to settle down and for some reason, Easton was still her only home.

The figure in her side mirror reminded her exactly why she was pulled over on the side of Easton’s main road. The salty East Bay breeze greeted her as she slid the window down. She simply needed to convince the officer that there was no need to give her a ticket for speeding down the winding shore road. It had been a momentary lapse of judgment. It felt so good to open up the cherry-red sports car as it hugged the curves of the coastal road. So low to the ground, she had felt like she was hovering above the pavement.

She reached over for the tan Coach satchel and the matching wallet. If need be, she could always sell the set on eBay to pay off a ticket. It was one of the few things that remained from her old life. With the license in hand and a plan in place, she turned around. Her mind went blank as she came up close and personal with a very male crotch. She couldn’t help but notice it before tearing her gaze away. The first step in talking her way out of this ticket was not sexually harassing the cop.

“You were driving sixty in a forty-five mile-per-hour zone. May I see your driver’s license and registration?”

She leaned over and opened the glove compartment. Slips of paper landed on the plush carpeting. Her stomach churned as she waded through crumpled-up receipts and a few unopened pieces of mail. The car had to be registered. Didn’t it?

It was the last piece of wrinkled paper stuck to a gum wrapper. She cheered silently and turned. The officer leaned down, close enough for her to smell his aftershave. His hand rested on her open window until he reached up for his sunglasses. Her heart jolted as he pulled them off.

Those brown eyes were heartbreaking in their familiarity.

“I didn’t expect to see you here.” She swallowed the lump in her throat. “I mean, I didn’t know.”

“Your hair is different.”

Her fingers slid through the straightened, highlighted hair that her brown curls had become. One quick decision she had regretted almost as soon as she walked out of the salon. It just wasn’t her.

She wondered if he saw any of the other little changes ten years brings, and, of course, the biggest change of all. With that thought, she clutched her bulky sweater closer around herself.

“You look the same.” It was true. Mostly. If anything, the years had made him sexier. Broadened the wide shoulders of a teenager into those of a gorgeous man. Blaming her interest in his body on the uniform, she tried to move her attention back to the situation at hand.

“You don’t.” His eye focused on her hair.

She held off the need to pull it all back into a ponytail and tightened her hold on the steering wheel. She tried not to fidget as he looked her over.

“Yes. Well, no. I’m moving back.” His silence made her anxious. “Are you going to give me a ticket? I really hadn’t realized I was going that fast.”

His lips lifted up into a slight smile and her heart tripped over another beat. “Wouldn’t that be a little rude? Giving the girl I thought I was going to marry a ticket, especially after not seeing her for ten years.”

You can buy She’s Going Home at: 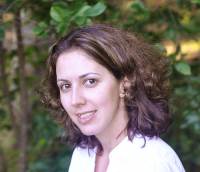 Bio: Isabelle Flynn grew up in a small town on the coast of New England. Returning back to the shore after several years of trailing her husband around the world, she’s finally back where she belongs…within view of Cape Cod Bay and only a short walk to the beach. When not writing happily-ever-afters, Isabelle is living her own with a real life superhero and their three children. You can learn more about her at http://www.IsabelleFlynn.com

You can find Isabelle at: