I’ve been a sport flirter since the first grade. I played first string in middle school and was a varsity flirter in high school and college. I was stationed in Norfolk, Virginia for my tour in the Navy, and with a ratio of one hundred men for each woman in that town…well, you do the math. Talk about a kid in a candy store. Today I might write about heroes and heroines who are younger than my children, but I’m not giving up flirting any time soon. I’m sure I’ll be a force to be reckoned with when I check into my nursing home some day.

In French Women Don’t Get Fat, Mireille Guiliano has this to say about older women: “The French rightly acknowledge there is a particular mystique to une femme d’un certain age, an expression with layers of meaning, including respect but also worldliness and hits of seduction. In Europe men naturally find women of this age group desirable, even sexy, and are often caught turning to look at them.” Embrace it, ladies. Just because one has reached a certain age, doesn’t mean she can’t continue to let her confidence and sensuality shine through in a look or a smile—that might possibly be held a nanosecond too long. On purpose.

I mean, why do most of us read romance novels? One reason is because we love watching our characters fall in love. There’s nothing like that rush of new love: the banter, a look here, an accidental touch there, unspoken words, sexual tension. You know the drill.

I’m a happily married woman, so the kind of flirting I’m talking about is not about wooing some stranger into a relationship. But I still enjoy that little rush of attention and admiration. It might be some clever sparring with a salesman at the hardware store. Or striking up a conversation with a handsome man while waiting for your bus. Maybe sharing a laugh about something you witness together in public. Perhaps a smile with your thank-you for a gentleman who has held the door for you. Instead of seduction, it’s more “Catch and Release.” You get the rush of catching the fish, but you’re not planning to take it home.

Sometimes it’s not appropriate to actively flirt, but that doesn’t stop me from checking out guys I might want to put in a book. As a romance author, I get to chalk it up as “research.” I write a Navy romance series called “Love in the Fleet.” Since I live near the Navy base about which I write, there’s plenty of research available. If I go to the base gym to work out around 0730 on Friday mornings, the crew of the USS Stud Muffin is there performing Command Physical Training. I get to watch the show—completely incognito in my old lady body on the treadmill—and they have no idea I’m taking mental notes. I mean, who knew a man’s pecs could do that when he’s doing pull-ups? Hey, just because I’m on a diet, doesn’t mean I can’t look at the menu.

One day I was standing in line at the base post office, silently ogling the back of the flight-suit-clad pilot in front of me. (I’m not sure if all military pilots are sexy as all get out or it’s just the addition of the flight suit.) Now, flight suits have zippered pockets on the arms and legs to stow survival gear. So this hot pilot goes to pay for his postage by unzipping his shoulder zipper and pulling out a credit card—which was pretty sexy in itself. But then he turned his head, smiled at me over his shoulder, and said, “You won’t tell anybody about my little secret hiding place, now will you?” I managed to smile back and said, “No,” which was difficult because I had already melted into a puddle of goo on the post office floor. Here’s how that experience played out in Book 2 in my series, Forget Me Not, about a playboy Navy pilot named Sky Crawford:

Sky flipped through his Rolodex of smiles, selecting just the right one because he would need the receptionist on his good side if he was going to get on any side of Dr. Untouchable. Usually chicks who didn’t fall for his I’m-the-bad-boy-of-your-dreams-honey smile succumbed to his aw-shucks-golly-gee-ma’am grin. Worked like a charm.

Certain he had Lillian’s attention, Sky unzipped a shoulder pocket in his flight suit and extracted his credit card. He glanced around dramatically, leaned over the desk, and said in a low voice, “You won’t tell anybody about my little secret hiding place, now will you, Lillian?” She took the card, her smile filling the room with sunshine. Too bad he wasn’t interested in the receptionist because it was clear he had her hook, line, and sinker.

Like Lillian, most women love a little extra attention from a handsome man. Just because you may no longer be young and/or in the market, attitude is everything. Stand proud, embrace your sensuality, let your beauty shine through, and enjoy the rush when there’s a hot guy around. Just don’t forget to throw the fish back if you’re not supposed to be taking home trophies.

Thanks for inviting me today, Babette. I’d like to leave a question with your readers and an e-copy of Forget Me Not for one lucky commenter. Do you enjoy a bit of flattery and flirting now and then? (And if you’d like to stay in touch with the captain of the sport flirting team, Sky Crawford, feel free to LIKE his Facebook page: facebook.com/SkyCrawfordFanClub)

Suffering from Peter Pan Syndrome and survivor guilt, Navy pilot and renowned playboy, Brian “Skylark” Crawford, swears he’ll never marry, uncertain he deserves happiness—besides there are too many hot chicks to choose from. War widow and veterinarian, Daisy Schneider, swears to love only animals after her Marine pilot husband is killed in Afghanistan—but work fails to ease her loneliness or the guilt that she might have saved him. Between one stray, matchmaking cat and a fiery battle with drug runners at sea, the fur flies as Sky and Daisy learn valuable lessons about life, love, and second chances.

You can find Forget Me Not on Kindle and in print at Amazon.com 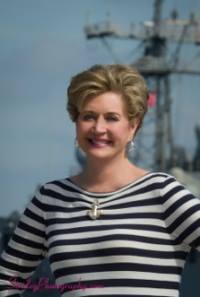 Heather Ashby is a Navy veteran who taught school and raised a family while accompanying her Naval engineer husband around the United States, Japan, and the Middle East. In gratitude for their Army son’s safe return from Afghanistan and Iraq, she now writes military romance novels, donating half her royalties to organizations that support wounded warriors and their families. She lives in Atlantic Beach, Florida with her retired husband and two rescue cats. Her debut novel, Forgive & Forget was voted “Best of 2013” by Suspense Magazine.

You can find Heather at:

17 thoughts on “Catch & Release Flirting – Guest Post by Heather Ashby, Author of Forget Me Not”