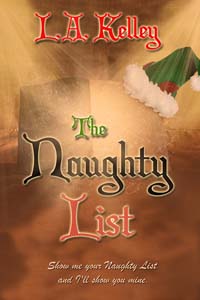 Welcome, L.A., so glad to have you here today. Tell us a little about The Naughty List:

Murder, mystical artifacts, an invisible demon with anger management issues, and an overbearing cupid—not what my heroine, Rosalie Thatcher, wished for on her Christmas list.

The holidays had always been a magical time for Rosalie, but not this year. Stephanie, her new manager at Penrose’s Department Store, is determined to make this season the most profitable in the store’s history, even if it sucks the life out of every employee. Introducing arbitrary rules and stealing the affections of Anthony, the cute temp Santa, were bad enough, but forcing Rosalie into the stupid elf hat was the worst. The worst, that is, until she meets a real E.L.F. (Elemental Life Form) named David and gets lassoed into a desperate hunt for the stolen Naughty and Nice List. Now all Rosalie and David must do is dodge a murderous invisible demon and recover the missing artifact before hellhounds track them down.  The couple race against time for without the magical guidance of the Naughty and Nice List, the world will tumble toward eternal chaos.

Not your mama’s Christmas story unless she sampled too much egg nog or was born with a cheeky sense of humor.

The plot for The Naughty List sprang up when I went into a Barnes and Noble during Christmas time. All the workers sported Santa hats. I asked the cashier if the managers wore them, too. With an eye-roll she leaned over the counter and whispered, “Of course not. It was their idea.” Aha!—a story is born.

People who work retail are real troupers, especially during the holidays. They are underpaid, overworked, and must be always smiling and in control, no matter how insane the atmosphere gets. In my book, people who mistreat retail workers get their comeuppance.

I find ideas all around. Sometimes I even take a noun out of a newspaper headline and substitute another word. Example: Suspect Werewolf arrested in home invasion.  Bingo.

I revel in the godlike ability to manipulate people and worlds, but mostly I like working in sweats.

I don’t do a lot of research or plotting. Usually, a scene or a snippet of dialog pops into my head that really speaks to me. Then I try to determine how the character got there and what she or he will do next. You might say I often work from the middle out to the beginning and end. My procedure makes no sense, but there you have it.

Seeing your name under a title. The softcover edition of The Naughty List doesn’t come out until December 6 but, swear to God, as soon as I get a copy in my hot little hands I’ll sleep with it under my pillow.

I’m a morning person. I exercise first and then do the New York Times Crossword puzzle to jumpstart the old brain cells. If I’m lucky they oblige without too much protest. I work on new stories during the morning and often edit a completed work in the afternoon. When my kids were young they always knew to ask me permission for something after seven at night. By then, my brain had shut down and all they’d get is a mumbled incoherent response always taken as ‘Sure. Go right ahead’.  (That explains the pony in the bathtub.)

I love the two main characters in The Naughty List, Rosalie and David. Let’s face it, if a writer doesn’t like her own creations, she should turn in her pencil and go home. Rosalie appeals to me because she’s a normal girl drop-kicked into an abnormal situation. She not only thrives, but finds true love along the way. Let’s hear it for average-looking smart gals with pluck, spunk, and normal bust sizes. They get very short shrift in life. David is kind and honorable with a deep-rooted sense of responsibility. You don’t have to be the best looking guy on the block to get the best girl. Neither is perfect, but they both have senses of humor and adventure. With those, you can get over anything…even an intrusive cupid.

Writing and good times with my family take precedence over everything else which is why my home often resembles a toxic waste clean-up site. I’m of the firm opinion nobody ever died from a dust bunny attack and eating snacks over the sink is ecologically friendly because it saves on water and dishwashing liquid.

I’d eat my own head if it was covered in chocolate.

Pretty much everything, even cereal boxes (What is maltodextrin and why is it in my Quaker Oat Squares?) The only exception is graphic violence or gore—don’t like it, won’t read it.  Any fiction must have a happy ending or, at least, bittersweet. Although I write fantasy and enjoy reading the genre, I also gravitate towards books I’d never write like scientific nonfiction, mysteries, and historical romances.  My mother was afraid of heights, but loved to read about mountain climbing, so I guess it’s in my genetic code to be drawn toward something I don’t do.

2. My black flats with the gummy sole; ugly as sin, not fit to be worn in public, but like walking on butter.

3. My writing chair; large, roomy, overstuffed, probably lots of crumbs under the cushions. I don’t have the nerve to look.

And now a question for you all: Admit it—everyone keeps their own Naughty List of people who tick them off. You secretly hope one day they’ll get their due reward. At the top of mine is a neighbor who lets her dogs out to mess on everybody else’s lawn, but never cleans up after them. (I secretly hope all the dogs get suddenly hit with explosive diarrhea when she’s with them in her Mercedes on the highway with no exit in sight.) Who’s on your own personal Naughty List?

A giveaway! One pair of pierced earrings that look good enough to eat for one lucky commenter!

David experienced a rush of guilt. All around the atmosphere had changed. He was super-sensitive to the yuletide. Magic in the air, holiday spirit, whatever—there was always something indefinably optimistic about this time of year. Even as a kid, before he understood family responsibilities, he sensed the truth. As easily as he now sensed the diminished effect of The Book. Whatever goodwill the season stirred up rapidly faded. Hard-working people like Rosalie paid the price of his stupid mistake.

The young man slipped out of the break room. He had enough time left to make one quick circuit of the first floor before staff trickled in. He worked from the front of Penrose’s to the back corner, ending up at Customer Service. For an instant, his spirits rose. A large box stashed underneath the counter wasn’t there the last time he checked. He ripped off the top, pawing through the contents. Fingering the garish green material, David didn’t know whether to laugh or cry. The oversize ears stuck out like a genetic experiment gone horribly wrong. The lining felt like steel wool. Had the holiday spirit been reduced to this?

A wave of despair enveloped him. “I’m so sorry, Rosalie.”On impulse, David reached into his pocket. He pulled out a gold-wrapped chocolate bar saved for later, swiped from a stash hidden in the store manager’s office. David scribbled on a sticky pad and pressed the note to the wrapper. He slipped the candy under the counter just before a sudden murmur of voices broke the silence. The staff had arrived. He ducked behind a rack of clothing in the back as a girl walked up to the counter, an elf hat tucked under her arm.

She halted in mid-stride. A sharply dressed twentysomething in a skin tight pencil skirt swooped down on her. To get a better view, David carefully eased back the clothes hanging in front of his face. He saw Rosalie’s fingers clenched around the hat. He chuckled to himself. She’s pissed, but hides her aggravation well. Sadhri would definitely approve of her self-control.

“Stephanie,” Rosalie stated calmly, “the hats are extremely uncomfortable. Everyone hates them.”

“If you simply try one on you’ll see—”

“I don’t have to. I know they’re fine. The hats put people in the holiday spirit and cheerful people spend more money.” Stephanie examined her perfect French manicure. “So close to Christmas is an awful time to be out of work.” Rosalie jammed the hat on her head without another word. “Excellent,” cooed Stephanie. “Keep that attitude up and your name will stop appearing on the Motivation Memo.” Without another word, she flounced off.

David knew he should dash-away. Every moment in the open was risky, but he couldn’t take his eyes off Rosalie in the idiotic hat. What would she do?

The young woman leaned against the counter glaring after Stephanie. She bobbled her head back and forth and spouted in a falsetto sing-song:

“I’m a special elf from Penrose’s
I wear the special hat
You are not a special elf
You’re a dirty rat
You don’t belong at Penrose’s
You don’t know how to play
Wiggle your tight ass out of here
Damn you, go away.”

“Who’s there?” she called

You can currently find The Naughty List on Kindle at: Amazon.com. Softcover and other electronic formats will be available December 6 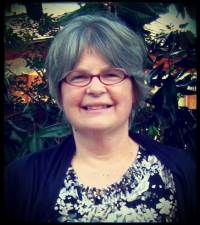 Bio I’m married with three kids, live in Florida, and have been writing since I was old enough to gnaw on a pencil. I actually wrote my first book at age seven, nine pages long and twenty seven chapters. It was very exciting, with lots of short punchy sentences…

Chapter Five. The boy saw the ghost. It was scary.

Chapter Six. The ghost saw him. The boy ran away.

Well, my mother liked it. I never considered submitting anything to a publisher up until the last few years. I received lots of encouragement from family and friends (and an occasional threat) and now here I am.

You can find me on the web at:

10 thoughts on “Interview With L. A. Kelley, Author of The Naughty List”