Welcome, Ryder. So glad to have you here today. Tell us a little about Ultimate Justice:

Ultimate Justice, A Trey Fontaine Mystery, is a psychological drama about an FBI agent and two homicide detectives working several cases, one of which involves a serial killer.

Special Agent Trey Fontaine has his hands full as he tries to juggle three different sets of cases in his hometown. While healing from a bullet wound, and on limited duty, he is charged with helping find out what’s happening to young women who are disappearing without a trace. But that’s just the beginning. Someone is beating and raping women in town, women who are related to his godfather, Detective Russell Coleman. And then the bodies of men start showing up, eviscerated. Are the crimes related? Or are has the town become a haven for all sorts of criminals?

Wile, Rocky, and Drew, three children from a violent home, take matters into their own hands and soon the small town of Raven Bayou, Louisiana is brimming with dead bodies. But the only victims are those whose background proves them to be deserving of such justice.

Can Special Agent Trey Fontaine stop the violence? Or will he only figure out the truth after someone he loves is dead?

Ultimate Justice, A Trey Fontaine Mystery, has been getting some really good reviews on Goodreads.com, which really pleases me because there’s nothing like having someone compliment your kid.

To polish Ultimate Game and get it off to the editor, and then get back to work on a literary novel about two retired doctors who are married to each other and who both become too ill to take care of each other. The working title is Love in the Hands of Strangers, and is based on a conglomerate of people.

I usually start a story with a plot idea. A What if? And so far, every time, I have known the beginning and the end.

I write in fits and starts. I find that I need to let the story percolate and while that happens, I go about my life. When I have enough that I feel I can start, I write the first and last chapters. Then I work toward the middle. I don’t  write every day, but when I do write, life just passes by. I forget to eat, exercise, talk to people—it’s as if I’m off in another world. At some point I’m forced to return to the real world and deal with everyday life, and while that’s happening, my brain watching the story percolate some more.

Sliding down a dam. It was a hot day and our family was at a small lake. My brother found a dam and we used it like a water slide. Funny thing is, none of us kids could swim!

In the mountains. The love the forests, the smell of pine, and the call of the birds when everything is still.

Mexican! No wait…Italian! No wait…chocolate, and ice cream! No wait…burgers and fries, and a big vanilla shake! No wait…never mind.

My reading jumps all over the place. What I read the most of is mystery/suspense/thrillers, but I love Jane Eyre, which I read every winter in honor of my daughter—it was the last birthday present she gave me before she passed away. I love historical, time travel, some fantasy, and I read a lot of non-fiction, including religious and spiritual history, natural ways to grow and store foods, and using natural herbs, spices, flowers, etc., for healing.

I can’t credit anyone for it. It seems to have been there from the time I learned the alphabet. As soon as I could recognize words on a page, I wanted to read, more and more.

Who influenced your decision to become a writer?

My husband. I was bored and reading a lot, and made a comment to my husband that someday, I’d like to write a book. He bought me a laptop with money he had stashed away for emergencies.

3. Canning my own organic veggies

And now, Ryder has a question for you all: Does the back cover blurb of a novel influence your decision as to whether or not to buy a book?

Quick flickers of light enhanced the details as the camera clicked—the petite body in a semi-fetal position on the bare dirt, back to the door. Click—naked and bruised, hair matted with blood.

“Shit,” he mumbled, forcing a smile, trying not to gag.

His reaction to the dead woman gnawed at him. He’d been on the job with the bureau nine years, long enough to become immune to grisly images of death, so what was it about this scene that affected him so deeply? He’d learned to distance himself from the carnage that came with his profession, or so he thought. He closed his eyes and drew a deep breath as a disturbing thought crossed his mind. Maybe he was losing it. Maybe being shot had done something to his mind. No. That’s not it, he thought. It was just seeing such a scene in his own hometown.

Back when he was a boy, the population was about nine thousand. Now it was closer to fifteen thousand, with two casinos. He hadn’t spent more than a weekend here since going off to Quantico. He took another deep breath, lifted the camera hanging from his neck, and limped a few feet away to get an overview shot of the shed.

Turning away, he wiped rain from his clean-shaven face, swallowed hard, and focused on the small forest across the road, trees fighting for life against the choking kudzu and poison ivy thick as the set of a jungle movie. Rain ran down his forehead from his short-cropped hair.

His Hummer, called “Streak,” for the silver-gray paint the color of a lightning bolt, sat at the edge of the dirt road not far from the deputies and crime scene techs who combed the weeds inside the splintered rail fence. They swarmed over the Louisiana mud, fire ants searching for a lost colony. A couple of officers tied off the ends of the overhead tarp and started stringing lights.

Right hand stuffed in the front pocket of his black jeans, Trey stood between a dilapidated tool shed and a shanty some poor Louisiana family had once called home. Paint peeling. Windows broken. The small porch sagging on one end.

He took a breath and turned back to the crime scene. His eyes adjusted from dark clouds and pouring rain to the even darker shadows beneath the canvas canopy. He stared into the maw of darkness, the open door to the outbuilding in question. The canopy gave the detective some relief from the rain and would allow the coroner to remove the body without washing away evidence.

“Got answers for you.” It was the smooth Southern drawl of Tamlyn Washington, intelligence analyst down in the New Orleans field office.

“May tenth, Ilene Grant reported her sister Kelli Stevens missing. This is the last girl working at Bayou Lights Casino who went missing. And you’ll love this. Four days ago, Michael Grant reported his wife Ilene missing as well.”

Sisters, he thought. “Is Ilene linked to Bayou Lights?”

A service officer set a box of supplies near the detective. Trey hadn’t seen him before, but there was no mistaking the family resemblance. Straight, dark hair. Gray eyes. Large dimples. Patrician nose. He was a damned Boudreaux.

“Nothing suggests that,” Tamlyn said.

He refocused, pulled out a notepad and pen. “I’m ready.”

Tamlyn described Ilene Grant and as much of the particulars as she’d found.

“Is it fun to work a case in a casino? I’ve heard things about Bayou Lights. Hopkins said it was probably a pain in the butt.” Tamlyn giggled.

“Cute. Tell Hopkins…Never mind. I’ll tell him myself.” Bobby Hopkins had been his partner for a little while and there was nothing he loved more than to razz Trey about getting shot in the butt.

He bit the inside of his lip. “Just as expected. She’s the rising star. Thanks for asking how I’m doing.”

You can find Ultimate Justice, A Trey Fontaine Mystery at: Amazon.com 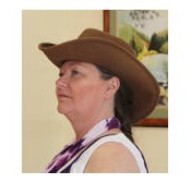 I graduated from University of California, followed by law school, and then worked in uniform at a Sheriff’s Dept in a major metropolitan city. Now I’m retired in a small town and happily reading, writing, gardening, and canning organic foods.  I’ve been writing for twenty years and have a serial fiction running in the local newspaper. I have published articles in newspapers and magazines, and have written my required million words on the way to getting a novel published. My first novel, Ultimate Justice, A Trey Fontaine Mystery, was published in June of 2011, and I’m now working on book two of the series, Ultimate Game, A Trey Fontaine Mystery, due out next summer.  I love my family and my English chocolate Lab (how could I not love him–he’s chocolate!)

You can find Ryder at: