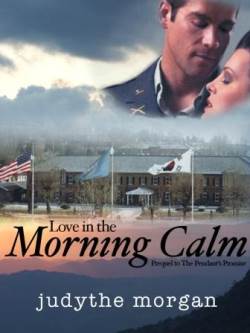 Welcome, Judythe, so glad to have you here today. Tell us a little about Love in the Morning Calm.

First, I want to thank Babette James for having me on her blog today. It’s always fun to visit new blogs and connect with new readers.

The roots for Ace and Lily’s love story begin when I worked as a DAC (Department of Army Civilian) in South Korea. The story is sprinkled with cultural details and historical events from the sixties. It is loosely based around a true historical event—President Lyndon B. Johnson’s Far East Trip in 1966.

Love in the Morning Calm is the prequel to The Pendant’s Promise, my debut novel. I know most authors write the prequel first. Somehow, I got it backwards. But, there’s a good reason.

After Pendant came out, readers wanted to know more about how Lily and Ace met so I wrote Love in the Morning Calm to give those readers what Paul Harvey calls “the rest of the story.”

In 1966, while on temporary assignment to South Korea, Green Beret Major Ace Cabot meets Lily Reed, a Department of Army civilian at Eighth Army Headquarters. Ace is a high-potential career officer, who should resist the temptation of any woman, but he can’t ignore his interest in her.

Lily is a firm supporter of the budding women’s lib movement. She enjoys her freedom and new life away from her stifling hometown. Her plans leave no room for any man. No matter how captivating his smile.

In an uncertain time, in a temporary safe zone, yielding to temptation changes both their lives forever.

My experience as a DAC at Eighth U.S. Army Headquarters in South Korea played a major role in writing Ace and Lily’s love story. Even the title is a play on South Korea’s other name-Land of the Morning Calm.

I’m currently working on a romantic suspense story set in Belfast, Northern Ireland. The inspiration for Chad and Annie’s love story grew during my many visits to Ireland and Northern Ireland. Annie’s preparing for her wedding to an older Irishman widower whose daughter Annie nannied from birth. Her first love Chad comes to Belfast on an undercover NSA investigation the fiancé’s involvement with a terrorist organization.

Truthfully, coming up with ideas are easy. Everything I see or do is fodder for a story idea. My story idea folder is bulging! I’m afraid I don’t have enough lifetime left to completely flesh out all my story ideas.

My writer’s heart thrills when readers tell me they liked my stories. Their enjoyment makes all the hours spent to produce something so worth it. I even like it when a reader dislikes a story and explains why. Reader impressions are what help me make the next one better.

There’s a way to balance everyday life and writing? Please, give me the way. My life is constantly interrupting my writing. But, I refuse to give up on all those story ideas. No matter what’s going on, I find daily time to sit at the computer and put words on the screen or I mentally sketch plot possibilities. I’ve also learned to “Swiss cheese” my writing, which is a time management process. Even if I only have a few minutes free, I write.

Because life does tend to erupt at the most inopportune times, I’ve learned to discipline myself to write early in the mornings before the rush and clutter of the day begins. I’m an early riser. Comes from growing up in a family of five with one bathroom and assigned times to occupy the necessary room. I’m up before the sun walking my dogs. I love the quiet and watching the sun come up over the San Juan Mountains. Once we’re home again, I feed the dogs and carry my cup of Irish breakfast tea to the computer.

Do you listen to music while you write? What are you listening to now?

I do play soft and quiet songs on my iPod in the background. Heterogeneous mixtures of songs (white noise) that set the mood or theme of whatever story I’m working on. While I was working on Ace and Lily’s story, I played music from the sixties. Right now, I have Celtic/Irish songs flowing as I weave Chad and Annie’s story.

And now Judythe has a questions for you all: One of my interview questions was about whether I listen to music when I write. I’m going to ask the same question of our blog readers. Do you listen to music to set the mood for whatever task you’re working on? If so what type of music?

One lucky commenter who answers and includes their contact info will receive a copy of Love in the Morning Calm. Winner chooses e-reader or paperback edition.

Two days later at G3, Eighth Army Headquarters, Lily opened Mack’s door to the outer office and stepped into the crowded anteroom. The Green Beret from Walker Hill, the officer she’d seen in the restaurant, sat in front of Sam’s desk. Her shorthand pad dropped to the floor. Her lips parted, but her vocal chords froze as her gaze locked with the intense eyes she hadn’t been able to forget.

She scanned across the tautness of his Class A green tunic. The rows of colorful campaign ribbons confirmed the vast experience she’d assumed. Today, the rectangular tag above the left pocket revealed his last name. Cabot. It seemed only five minutes since she’d seen him at the resort.

An unrestrained smile swept across his face. He recognized her too.

Sam, his brow furrowed, moved into the narrow corridor formed by his desk and hers on either side of Mack’s door. Skirting her immobile body, Sam bent, picked up her shorthand pad, and leaned through the doorway. “Major Cabot has arrived, sir.”

Sam shifted back to his desk. The major advanced into the space Sam vacated as Lily squished against her desk.

Cabot gave her an exaggerated wink and went into Mack’s office. His spicy aftershave misted her senses and sent her pulse soaring. Fireworks exploding inside her body singed her cheeks.

He stopped precisely eighteen inches in front of Mack’s desk and snapped his arm in a perfectly executed salute. “Major Cabot reporting for duty, sir.”

Mack returned the formal salute with a wave of his right hand in the general vicinity of his forehead. “At ease, Major. Have a seat.”

The exchange broke Lily’s trance. She closed the office door and scowled at Sam. “Why didn’t you say something at Walker Hill?”

Sam shoved the shorthand pad at her. “Didn’t know it was him. Reporting orders don’t come with pictures. Even if they did, I don’t know that I would have recognized him. I wasn’t paying as much attention to the man at Walker Hill as you were.”

She didn’t argue. Her good manners had disappeared Saturday night at The Crane. And worse, the major likely took her attention for interest. She sank into her metal desk chair. The wheels creaked on the linoleum, mocking her distress. “He’s the liaison?”

With more pomp than necessary, she propped her steno pad upright on the metal typing table with a clanking thud. Major Cabot would be around until President Johnson left. Way too long to have to deal with the man and the effect he had on her.

“From what I hear, the major’s quite the Casanova. I’m hoping to pick up pointers.” The G3 clerk, Lewis Watts, pushed away from his desk. I’m off to deliver the troop report.”

Lewis paused at her desk, slid his stubby brown fingers down into the key well of her typewriter. She looked up. He flashed one of his goofy, playful grins. His white teeth sparkled against his ebony skin. “I saw that wink the major gave you. You may have met your match this time. He’ll not give up easily.”

A fireball of panic formed a knot in her stomach.

“Lewis is right,” Sam said. “I’ll be watching him, but you need to guard yourself, Lily. Cabot has a reputation.”

Lily aligned the letterhead paper and carbons in her typewriter. “I’m not interested. He’ll figure that out for himself soon enough.”

And, somehow, she’d ignore the explosions the major ignited in her body.

You can find Love in the Morning Calm at: 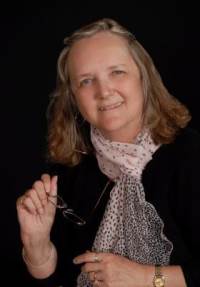 She and her husband live in the Rio Grande National Forest where the wildlife in their backyard can be delightfully distracting. When she’s not writing, you’ll find her reading, browsing antique shops or walking her dogs–a very large Old English sheepdog and an equally tiny Maltese.

You can find Judythe at:

8 thoughts on “Interview With Judythe Morgan, Author of Love in the Morning Calm”