I am delighted to welcome back fellow New Jersey Romance Writers member and international bestselling author Diana Cosby as my guest today! 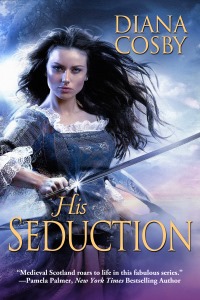 I love writing the MacGruder brother’s series.  Each family member fascinates me, and I love finding a story that will not only challenge them, but allow them to open their hearts and find love.  Lord Griffin Westcott, aka Wulfe, has appeared in the first four books of the series, and I was thrilled to write Griffin’s story.  Griffin is a man in control, one whose guilt of the past keeps him from entertaining a serious relationship, so I knew I had to find a heroine who would toss his life upside down and out of control – enter Lady Rois Drummond.  A woman of passion, to protect her father, Rois would do anything, including challenge the man she believes is her enemy.   And so their story, His Seduction, begins.  Except, unknown to Rois, a dark secret lurks from her past.

Lady Rois Drummond is fiercely devoted to her widowed father, the respected Scottish Earl of Brom. So when she believes he is about to be exposed as a traitor to England, she must think quickly. Desperate, Rois makes a shocking claim against the suspected accuser, Sir Griffin Westcott. But her impetuous lie leaves her in an outrageous circumstance: hastily married to the enemy! Yet Griffin is far from the man Rois thinks he is—and much closer to the man of her dreams…

Griffin may be an Englishman, but in truth he leads a clandestine life as a spy for Scotland. Refusing to endanger any woman, he has endured the loneliness of his mission. But Rois’s absurd charge has suddenly changed all that. Now, with his cover in jeopardy, Griffin must find a way to keep his secret while keeping his distance from his spirited and tempting new wife—a task that proves more difficult than he ever imagined…

Nay, Lord Monceaux must nae see her father! Rois rushed into the torchlight and pointed a pale finger at the baron. “He canna be trusted!”

Against the smoke and stench of anger, all eyes shifted to her.

Heart pounding, Rois took in the powerful lords, Scots who knew her, nobles who would believe her claim. She caught her da’s frown and shook her head, thankful when he remained silent.

“And why is that, lass?” de Moray asked from his seat on the dais.

“Yes,” Lord Monceaux added softly, his hooded gaze raking her from head to toe, “a fact I would be interested to hear as well.”

The anger in the English baron’s deep voice swept her, but his eyes, God in heaven, their intensity seared her like a whip. What reason could she give to convince those within the chamber he was unworthy? Thoughts battered her mind, but she discarded each.

An idea ignited in her mind. Nay, she couldna. ’Twas outrageous? As if with her da’s life at stake, she couldna take the risk.

With her heart pounding, she faced the Scots. “A month past, the baron took liberties with me. After,” she hurried, refusing to meet Lord Monceaux’s gaze, “he gave me a false promise he would return.”

Nay, desperate. Several warriors cast curious glances toward Lochlann, but she didn’t acknowledge him. She refused to endanger her friend or her father. She would endure the consequences of her actions alone. Rois took another step forward and started to speak.

But her mind went blank.

Her father’s face darkened with displeasure as he moved in her direction.

What was he doing! Stay, she mouthed, and motioned for him to remain where he stood.

With a frown, he paused.

Her body trembling with relief, she turned toward Lord Monceaux, his expression that of a man confident in his decisions, who scrutinized her as if prey. Heaven help her, what had she done? Could she make her father understand her actions? Would he ever forgive her? However much she longed to look at her father, she kept her gaze leveled on the intimidating warrior.

After a long moment, Lord Monceaux’s mouth curved with a confident tilt. “You were saying? I believe something about why I cannot be trusted?”

At the soft challenge of his words, her irritation trampled caution. Fine, let the braggart talk his way out of this. “And, shamed I am to say, this man has left me with child.”

Griffin stared at the woman in disbelief. Against the wash of torchlight, a tumble of chestnut hair embraced the sweep of her pale cheeks, and she had full lips that any man would desire. But it was her eyes that held him, eyes as green and enchanting as the fields of Scotland.

He stiffened. Her beauty mattered naught.

Griffin assessed the room stunned how the nobles eyed him with violence. Did they believe her ludicrous claim?

His anger grew. How dare the chit sabotage a situation already dire! From her sultry burr, he knew she was a Scot and that she understood his presence within this enemy stronghold placed his life in danger. Did she want him dead? God’s teeth, never had he seen this woman in his life!

The warriors closed around him, shaking their claymores, their teeth bared in the smoky light.

Bloody hell, if he didn’t quell her lie now—

“He does nae deny it,” one man yelled.

Griffin rounded on the Scot. “Wait!”

At the man’s words, the woman shifted. Face pale, she took a step back.

God’s teeth, she was not abandoning him in this mire. The woman would admit her lie! When she made to take another step back, Griffin caught her hand, aware of every Scot in the room watching and waiting for the slightest error, for any excuse to kill him. God’s teeth! In all his years of service to the king, he had never been foiled by a woman.

Nor would he be now.

“My lady,” Griffin said, his words strong, clear of doubt, and, through sheer will, void of anger. “’Tis my deepest regret you believe I have slighted you in any manner.” He raised her hand, and was at once irritated by the sweep of awareness, by the softness that lured him.

Anger sparked in her eyes. She tugged to free her hand.

Griffin held firm, lifting her fingers and pressing a chaste kiss upon her knuckles. Nerves darkened her impossibly green eyes, eyes a man could drown in, eyes that would make him beg. Bedamned. After her outrageous claim, he should feel naught but contempt. But he wanted her, damnably so.

“If indeed I have left you with child,” Griffin said, “’tis honor I offer you.” Eyes narrowed, he scanned the room, meeting the impenetrable fury of each Scotsman’s gaze. Satisfied, he turned to the stunning woman whose hand trembled within his. “Before your peers, I will take you for my wife.”

Her face drained of color, a reaction he’d expected. Well he understood Scotland’s custom of handfasting, that once a pledge was issued in public and agreed upon, they would indeed be wed. Feeling confident, Griffin waited for her to admit the truth.

The growing concern in her eyes assured him that she regretted her lie. ‘Twould be but moments before she declared her false accusation to all, and he could return to de Moray’s decision concerning King Edward’s offer.

Rois again tried to yank her hand free of Lord Monceaux’s grip. He smiled down at her, but no warmth existed in his hazel eyes. Could she fault him for his resentment?

Aye, Lochlann had asked her if she was daft when she voiced her assertion. Well, now she sat in a fine mess. Proof her mind was indeed muddled.

Shame filled her. Of all of the mischief she’d stirred over the years, naught had reached this magnitude. Why had she insisted on attending the meeting? And what of her promise to her da to stay in the shadows unnoticed?

Thank heaven the men crowding around her and Lord Monceaux were blocking him from sight.

“Enough,” her father declared. “Let me through.” 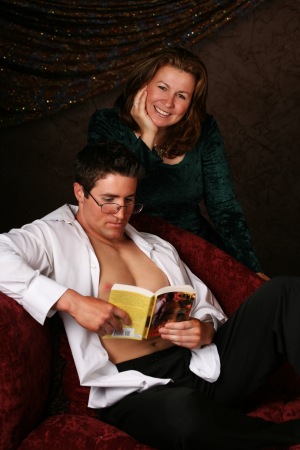 Bio: A retired Navy Chief, AGC(AW), Diana Cosby is an international bestselling author of Scottish medieval romantic suspense.  Her award-winning MacGruder Brother books are available in five languages.  Diana has appeared at Lady Jane’s Salon, in NYC, and in Woman’s Day, on USA Today’s romance blog, “Happily Ever After,” MSN.com, and in Texoma Living Magazine.

After her career in the Navy, Diana dove into her passion – writing romance novels. With 34 moves behind her, she was anxious to create characters who reflected the amazing cultures and people she’s met throughout the world.   In August 2012, Diana released her story in the anthology, “Born To Bite,” with Hannah Howell and Erica Ridley.  Her next release is the fifth book in the award-winning MacGruder brother’s series, His Seduction – August 15th, 2013.  Diana looks forward to the years of writing ahead and meeting the amazing people who will share this journey.

You can pre-order His Seduction, Book 5 in The Magruder Brothers Series (Releases August 15, 2013), at:

6 thoughts on “His Seduction by Diana Cosby”