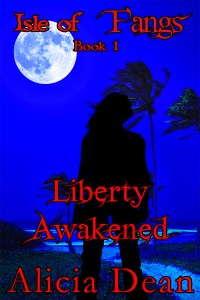 I’m delighted to welcome Alicia Dean here today for an interview and a look at her new YA novella, Liberty Awakened – Isle of Fangs. Don’t forget to leave a comment for a chance to win in Alicia’s giveaway!

Hi, Alicia, thank you for being my guest! Tell us a little about Liberty Awakened:

My current release is my first attempt at a YA story. It is a Vampire Novella titled Liberty Awakened and is the first in a planned series. I really enjoyed writing it…hope readers enjoy reading it.

Evil lurks beneath the surface in the beauty of the tropics…

After graduation from her small, Oklahoma high school, Liberty Delacort is looking forward to a fun-filled summer before college. But when the people she trusts the most betray her, and a letter arrives claiming her deceased father is still alive, she jumps at the chance to travel to an exotic island to meet him.

But her excitement is short-lived. Her father is dying, and he doesn’t want her around. And, in spite of its outward tranquility, the island is filled with danger and ominous secrets. The secrets soon begin to unravel, and she discovers she is a descendant of Van Helsing, the vampire hunter.

The one up side is her budding romance with the sweet and sexy Ryan Kelly. But even that is threatened when—in spite of her fear of him—she finds herself attracted to an insolent, formidable vampire. Her plan to stay away from him fails when she learns he is the only one with the ability to train her to fulfill her destiny—to save humans from a faction of vicious vampires.

Will her inexperience lead to her death—and the death of others—or will she rise to the challenge and realize her full potential as a Hunter?

I am actually working on three projects at once. I am working on a very short St. Paddy’s Day story in conjunction with some of my fellow OKRWA author friends, and a Spring short story for an anthology with three other authors, and the sequel to Liberty Awakened.

I love that I have an outlet for these characters and plots that fill my head and demand release. I would probably either be a writer or a psychopath. J

Plotting, for sure. I have to have a good skeletal outline for where the story is going before I can dig in and work on characters and scene writing.

First thing in the mornings. Once things have started happening throughout the day, my creativity wanes, and my brain is starting to fill with too many other things and the writing is usually pushed aside.

I think it’s the scene where Eli carries Liberty into the house after an extremely tough training session. Because it shows his vulnerability where she’s concerned, and at the same time, shows her toughness and determination, which is what he admires about her.

It’s not easy. I work a full-time job, I am an editor for The Wild Rose Press, and I have various other commitments and projects. Sometimes, it’s extremely difficult, but I just grab whatever time I can. My goal is to start arising at 5 a.m., which is two hours earlier than I really have to get out of bed, and use that time for writing and editing. So far, I haven’t been able to make myself do that, at least not on a regular basis.

I don’t have a single favorite memory, but one of my favorite memories is that, even though Mom and Dad had six kids, every year on our birthdays, our Dad took the birthday kid out for a birthday meal wherever we wanted to go, just the two of us (or them). I am not even sure how many years he did that, but it sticks out in my mind. Also, I have vivid memories of every time I was ill, how Mom would sit with me at night, take care of me, and be so loving and sympathetic. Dad’s role was to go to the store for us when we needed…or wanted something.

Eli moved closer until only a hint of space separated their bodies. “Liberty?” His raspy voice was like a caress over her flesh. A breeze wafted over her bare back, and she shivered. She waited breathlessly for his next words, his next move. “You find me irresistible,” he whispered, his gaze never leaving hers. “You’re helpless to deny me anything. Your knees are weak.” He stroked his finger over her shoulder, letting them trail down to the center of her chest, just above her breasts. “Your heart is pounding for me right now. All you can think about is what it would feel like to kiss me.”

She licked her lips, wishing her glass wasn’t empty. Her mouth was so dry, she couldn’t speak. But oh wow…was he ever right. She didn’t even mind his aggressive, unusual approach. Something about the atmosphere, about leaving behind the trappings of home. The memories of what Cam and Alyssa had done made her reckless. She took his glass from his hand without breaking eye contact. His eyebrows rose as he watched her take a sip of the strong liquor, whatever it was. It burned her throat and eyes, but she resisted the urge to cough. It had done the trick, and she was able to whisper, “Yes.”

The corner of his mouth quirked. He moved closer, brushed his lips along hers, just a tease. That was it? That was the kiss? She bit back a groan of frustration. Her body ached with disappointment. But he moved toward her again, his eyes searching, his lips a hairsbreadth from hers. He stroked a hand down the side of her neck. His touch sent a flash of fire through her veins. She nearly moaned in anticipation, in yearning to feel his mouth, firm and hot against hers. She braced herself. Something primitive deep within told her this would be the kiss to rival any other. She swayed, her lids drifting shut, every nerve in her body tingling…

A scream tore through the night, breaking the spell. Liberty’s eyes flew open, and she gasped.

Eli stepped back. “Dammit,” he bit out. He cupped her cheek in his hand. “Don’t forget where we were.”

Then he was gone. She could barely feel her legs. Were they still supporting her? What the hell had just happened?

She shook her head, then followed the sound of excited voices where the scream had originated.

A group of people had gathered around a gazebo at the back of the house.

Liberty pushed her way through the crowd. Ryan knelt in the center of the gazebo next to a bench where a girl lay still. Her skin was as white as the moon, blank eyes staring at the midnight sky.

Liberty was afraid to look, but somehow couldn’t help herself. She scanned the girl’s body from head to toe. No blood. Good, that was a good sign, right? But the girl looked so…dead.

“Son of a bitch,” a male voice shouted. “She’s been drained.”

Alicia Dean lives in Edmond, Oklahoma and is the mother of three grown children. Alicia loves creating spine-chilling stories that keep readers on the edge of their seats. She’s a huge Elvis Presley fan, and loves MLB and the NFL. If you look closely, you’ll see a reference to one or all three in pretty much everything she writes. If she could, she would divide all her time between writing, watching her favorite television shows-such as Dexter, Vampire Diaries, Justified, and True Blood-and reading her favorite authors…Stephen King, Dennis Lehane, Michael Connelly, Lee Child, and Lisa Gardner to name a few.

You can find Alicia at:

You can find Liberty Awakened at:

13 thoughts on “Interview With Alicia Dean, Author of Liberty Awakened – Isle of Fangs”