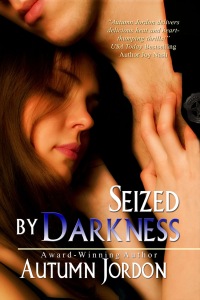 Today’s guests are author Autumn Jordon and her newest heroine Nicole Carson.  Welcome ladies.  Autumn, can you tell my readers, where and how you met Nicole?

AJ: First, Babette, thank you for inviting us to your blog.  I met Nicole at my local post office. I live in the country so our local post office is about twelve foot by twelve foot.  I always seem to run late and that day wasn’t any different than many others. I rushed inside to make the daily pickup and out of the corner of my eye I caught a glimpse of Nicole.

NC smiles shyly: I knew Autumn could help me.

AJ: Nicole’s picture hung on the wall among the local church’s apple dumpling festival announcement, the FBI most wanted list, and other various announcement flyers. Maybe it was the sunlight filtering in the front window, or something magical—Nicole’s eyes called to me. I studied her picture. Afterwards, I couldn’t get her out of my mind. That night, while lying in bed, waiting for sleep to come, I heard her voice and her story.

Nicole: I told Autumn how I was kidnapped and by who.

Autumn reaches over and gives Nicole’s hand a squeeze.

NC: I knew no one could save me from the monster. Gorgon.  He was very powerful and had many men guarding me twenty-hours a day. The way they looked at me, at times, frightened me. I knew they would’ve liked to have me for their own, or once, because I was the mafia lord’s woman, but I also knew, as they did, if they’d so much as touched me, Gorgon would kill them and their families would have no closure. I did whatever Gorgon wanted because I knew if I didn’t, he’d throw me to the dogs.

You have a son. He is Gorgon’s son?

NC: Yes.  Gorgon’s wife is older than he and was barren.  He wanted an heir.

It was your son who prompted you to escape?

NC: I always planned to escape, someday. I missed my family so much. I stole a dollar at a time and stashed it away, hoping one day I might be able to pay one of the guards to help me. It was a foolish idea, I know. No amount of money would keep them safe from Gorgon’s wrath.  But as Luka aged, I realized if I was going to save him from becoming like his father, we needed to escape. I couldn’t stand the idea of my baby growing into a monster like his father and would rather die trying to escape, taking Luka with me to heaven.

Thank God that didn’t happen. So who found U.S. Marshal Will Haus? Who BTW is beyond yummy.

Nicole blushes and says, Autumn did.

AJ: I knew of Nicole’s plan to escape and I knew she was going to need help to disappear. Gorgon had the wealth and power and resources to find her, no matter where she ran. Will just walked into my dream one night, wearing a badge that reminded of an old west sheriff. I had worked with FBI agents and military men before but never a U.S. Marshal. I started research on the U.S. Marshals the next day and was surprised to learn that on the human trafficking front this agency is the go to agency.

AJ: There is a lot about the agency and the men and women of it that is interesting.  The more I learned the more plots came to mind and so came the idea for the C.U.F.F. team.

AJ: Central Undercover Felony Force. This elite team of which presently there are six men and two women is a great bunch to work with. They really care. Readers will meet most of them in SEIZED BY DARKNESS.

NC: They’re really great people and some I’ve come to know really well. In fact, the wife of one, Gary, is now my best friend.  She’s an ex-cop and has inspired me to go back to school.

AJ: I think you inspired Sharon too.  Your strength and determination and relentless resolve not to give up hope, has inspired all of us.

So back to Will.  What is he really like? And do the two of you have plans for the future?

Nicole cheeks brightened and she brushes her hair back from her face as if the thought of the man makes her temperature soar.

NC:  Will is a wonderful man. He has a heart like no other man I’ve ever known.  He is passionate about his country, his job and his family.

Which now includes you?

NC: Yes and Luka. And my whole family. They love him.

Nicole, I’m so happy everything is working out for you. After what you have gone through, you deserve the best. I think you have that in Will, Luka, Autumn and your family. Thank you for taking the time to visit and share your story.

Autumn, what is next? You said you have a whole team.  How many stories do you have planned?

AJ: Lots.  The next C.U.F.F. story will be released in spring of 2013.  This is Chase’s story as he goes undercover and meets Emma, the woman of his dreams. After that Aden shares his story, although Jolene has been bugging, saying, “Ladies first.”  I’m not going to share details on either story just yet.

I hope to do so after the holidays.  In the meantime, I’ll have a short Christmas story, Perfect, which will be released on Nov 14, 2012.  I hope everyone will check it out. 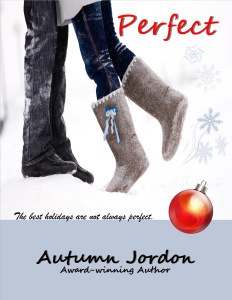 Before you go, will you share an excerpt of SEIZED BY DARKNESS?

AJ: Sure. Here you go. BTW here are buy links to Seized by Darkness. It’s available on B&N and Amazon in both digital format and paperback.

Excerpt of SEIZED BY DARKNESS (Chp 14): (This is copyrighted material and may not be copied or used in any format without the express permission of the author, Autumn Jordon.)

The old air conditioner, which did little more than act as a fan pushing warm air into the room, rattled in the window, pulling Nicole from a fretful sleep. Under her long hair, sweat beaded the nape of her neck. She stretched and peeled away from the damp sheet under her. Through heavy lashes, she noticed a boot tapping the air at the base of the single-sized bed and her heart shot into her throat. Clutching the sheet to her bare breasts, she rolled and scrambled to the opposite side of the bed, only to be pinned, faced-down onto the mattress by the intruder.

“Let me go.” She thrashed and kicked back, striking air. Her breasts squished into the mattress springs. She ignored the pain, reached behind her, and grabbed fists filled with the assailant’s long hair. With all her might, she yanked hard.

She winced, her ear ringing with the attacker’s cry.

He dropped his weight from his elbows, forcing the air from her lungs. His fingers locked around her wrists and tried breaking her hold on him. “Damn, Katrina. Stop pulling. You’re ripping my hair out.”

Every muscle of her body went stark still, except for her eyes-they widened. “Will?” Over her shoulder, she peeked through her auburn strands and caught a glimpse of Will’s cheek plastered against her bare shoulder.

Nicole became aware of the softness of his hair between her fingers, his musty scent bombarding her nostrils on the cusp of each sharp breath she inhaled, and every inch of his hard body pressing against her backside. Warmth pooled between her legs and she closed her eyes against her body’s reaction to him. “You first.”

He let go of her wrists.

Nicole slid her arms close to her body and pushed against the mattress, trying to topple his weight from her, so she could roll over, but he kept her pinned in place.

The discounted, thin sheets she’d bought at the local Dollar-Mart and his clothing were the only barrier between his hot flesh meeting hers. The knowledge caused the room to grow warmer. “I let go. Now get off of me.” She bucked against him. A mistake. She laid still.

“Not until you tell me what were you reaching for?”

“What?” She glanced at him and then scanned the nightstand next to the bed. “Nothing. I don’t have a gun if that is what you’re thinking. I was just trying to get away.”

“Not until you promise me you won’t try to run.” Will arched up and bore his weight on his elbows. His strong thighs held her legs in place while his hard ridge pressed against her backside.

She fisted the sheet below her, trapped her lip between her teeth, and wrestled with the fire mounting low in her belly. Not to go dizzy with want, Nicole remained still. “I’ll scream if you don’t. My landlord has great hearing, and, he has a huge shot gun.”

She struggled to push up on her elbows again. “Why not?”

“I’ll have no choice but to flash my badge and haul your ass out of here, sheet optional.” 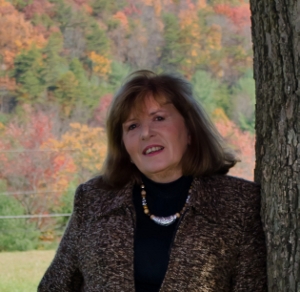 Bio: Award-winning author Autumn Jordon is a quiet nut who has earned the title of ‘trouble’ by her family and friends. Even her pets look at her with a cautious eye. Life is never dull in her valley surrounded by the beautiful Blue Mountains of northeast PA.

No matter what she is doing, Autumn is always busy dreaming up ways to make the very believable characters of her romance novels get into trouble and to also fall in love.

6 thoughts on “Interview With Author Autumn Jordon and Her Newest Heroine, Nicole Carson”