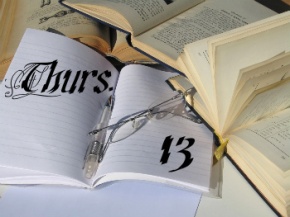 I spent way too much time picking out pretty flower pictures last week, (but  it was fun,  lol), so for today’s Thursday Thirteen, a simpler random selection of some non-fiction books on my reference shelves.  Non-writing craft this time:

What are some interesting or favorite reference books on your shelves?

What do your shelves say about you?

12 thoughts on “Thursday Thirteen – Back to the Books”